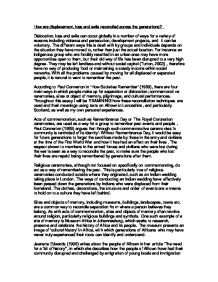 How are displacement, loss and exile reconciled across the generations?

How are displacement, loss and exile reconciled across the generations? Dislocation, loss and exile can occur globally in a number of ways for a variety of reasons including violence and persecution, development projects, and it can be voluntary. The different ways this is dealt with by groups and individuals depends on the situation they have moved to, rather than just the actual location. For instance an indigenous group who are forcibly resettled in an urban area may have more opportunities open to them, but their old way of life has been disrupted to a very high degree. They may be left landless and without social capital (Turton, 2003), therefore have no way of producing food or maintaining a steady income within social networks. With all the problems caused by moving for all displaced or separated people, it is natural to want to remember the past. According to Paul Connerton in 'How Societies Remember' (1989), there are four main ways in which people make up for separation or dislocation; commemorative ceremonies, sites or object of memory, pilgrimage, and cultural performances. Throughout this essay I will be EXAMINING how these reconciliation techniques are used and their meanings using texts on Alltown in Lancashire, and particularly Scotland, as well as my own personal experiences. Acts of commemoration, such as Remembrance Day or The Royal Coronation ceremonies, are used as a way for a group to remember past events and people, Paul Connerton (1989) ...read more.

An article about Scottish migration, Hunting Down Home, by Paul Basu (2001), explains some of need people of Scottish descent feel they have to visit Scotland even generations ahead of the individual to have experienced the move. Part of his explanation includes the idea that a person may want to 'search for the self among the sites of memory'. He then goes on to point out that this is an example of the typical individualistic culture of the West, which is characterised by a 'preoccupation with the self, knowing oneself, understanding oneself, improving oneself, discovering 'the truth' of oneself, testing oneself', or in other words, a concern with reconciling the loss of their past. I think one of the most interesting things brought up in the article, and which I can identify with, is that not only do the people who have migrated from Scotland feel draawn towards their homeland, but also their future relatives who have never been to Scotland themselves. Being quarter Greek Cypriot, but never having visited Cyprus, I experience an appeal to, and interest in Cyprus in much the same way that the Scottish people described in Basu's (2001) article experience the need to go to Scotland. However, I have never been part of anything considered 'Greek', I don't speak the language and have never been inside an Orthodox Church, and as a result I feel the phrase 'you can't miss what you never had' reflects my ...read more.

Events held were effectively acts commemoration, such as the Son et Lumiere at the St Andrews cathedral, which showed a story of St Andrews' past, focusing on the fishing trade which started around in 1400. The landscape of Scotland itself is considered a site of memory, the highlands, Arthurs Seat and Edinburgh Castle are a few examples, along with the various museums are libraries full of artefacts and documents pertaining to Scottish heritage. A number of cultural performances including highland dances and bagpipes performances were organised throughout the homecoming project with the aim to reconnect and welcome people back with traditions they may not be aware of or have not seen. Te events were successful in encouraged re-visiting, and were successful in welcoming back a number of Scots from around the world as well as renewing the memories of those who never left. In conclusion, the methods of reconciliation used globally mainly seek to conserve memories of the past, both in actual objects and buildings etc., as well as physically going to their homeland, but also through less visible methods; stories, music and traditions. Although it may be most important for dislocated or exiled individuals to keep a sense of their rootedness in the homeland, remembrance of the past is also plays a significant role in individuals who have not moved and who aim to keep their identity intact despite changes within the society they live in. ...read more.