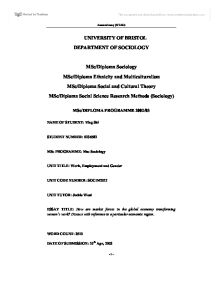 How are market forces in the global economy transforming women's work? Discuss with reference to a particular economic region.

UNIVERSITY OF BRISTOL DEPARTMENT OF SOCIOLOGY MSc/Diploma Sociology MSc/Diploma Ethnicity and Multiculturalism MSc/Diploma Social and Cultural Theory MSc/Diploma Social Science Research Methods (Sociology) MSc/DIPLOMA PROGRAMME 2002/03 NAME OF STUDENT: Ying Shi STUDENT NUMBER: 0236582 MSc PROGRAMME: Msc Sociology UNIT TITLE: Work, Employment and Gender UNIT CODE NUMBER: SOCIM2012 UNIT TUTOR: Jackie West ESSAY TITLE: How are market forces in the global economy transforming women's work? Discuss with reference to a particular economic region. WORD COUNT: 3510 DATE OF SUBMISSION: 10th Apr, 2003 How are market forces in the global economy transforming women's work? Discuss with reference to a particular economic region. Introduction Globalization appears to be the buzz word of the 1990s. Over the last few years, the number of books and articles on globalization has grown exponentially. Such is its attraction that it is now a research topic in many academic fields, including sociology, international relation, economics, anthropology, geography, and even cultural studies.1 During the twentieth century economic and social survival came to be associated with organization around production, trade unions bargaining for higher ways and better conditions at work. These have continued to be important aspects of material and social existence; indeed, women worker in poor countries have been part of a sustained struggle to organize in the workplace. However, the wage is only one aspect of human being's survived, and exclusive preoccupation with the wage imposes a false demarcation on daily existence. In the poor countries of the world many people, including the majority of workers are making their living outside the regulated on organized sectors.2 'WTO', 'Globalization', 'Global restructuring', these words are often ringing these years in China. It seems that everyone can say something about what changes have these words brought to us. However, few of us have thought about the effect that the global economy transforming had brought or would bring to us. Studies of global restructuring typically reflect two normative stances: a liberal internationalism that accepts "globalization" as a contemporary, market response to "internationalized" consumer and ...read more.

Each couple always has more than 1 child, so the parents do not have the ability to support all of their children to obtain the education. The most elder brother/sister always leaves the village to Shanghai when they are still "Children". They need to earn more money to support his/her younger brothers/sisters to finish their study. No matter you are male or female, you have to find a job in Shanghai. Most of female peasant workers are served as low wage, low-skilled menial workers. The average salary of them is 5yuan/hr. The salary maybe is not the lowest in Shanghai. But it is not easy for female peasant workers to find such a job. As a menial worker, she should stay in employer's home for some time. Trust is a serious problem occurred when they supply service for the employer. Many of them will be looked upon down. It is often reported in the newspaper that when something is stolen in the employer's family, the menial worker will be the first suspicious person. Although some of them are really the stealers, most of them are blameless. But no matter how they explain, it is more likely that they will lose their job definitely. It is really an instable job. Another problem is that these menial workers are always be neglected in the state social security system. Peasant workers also get fewer medical benefits.18 They can not get the feeling of safety. The lack of a "safety net" creates anxieties about their future.19 It costs all the money they have to leave the village to Shanghai. But is it worth for them to do that? Is there any fast way for them to earn large amount of money in a short time? When I watched one of the "China season" programs, I find some answers. The fastest way for they to get a large amount of money is to be the s*x workers. ...read more.