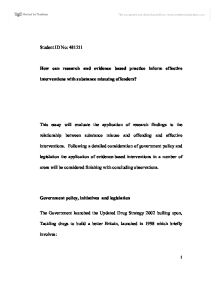 How can research and evidence based practice inform effective interventions with substance misusing offenders?

Student ID No: 481211 How can research and evidence based practice inform effective interventions with substance misusing offenders? This essay will evaluate the application of research findings to the relationship between substance misuse and offending and effective interventions. Following a detailed consideration of government policy and legislation the application of evidence-based interventions in a number of areas will be considered finishing with concluding observations. Government policy, initiatives and legislation The Government launched the Updated Drug Strategy 2002 builing upon, Tackling drugs to build a better Britain, launched in 1998 which briefly involves: prevention measures targeted at young people and suppliers; reducing drug-related crime and its impact on communities; reducing drug use and drug-related offending through treatment and support; reducing drug-related death through harm minimisation. Recognition is given to the input required from many different agencies including criminal justice, health, education and the development of social and economic policy. At present, however there still appears to be over-reliance upon Misuse of Drugs Act 1971 in an unfortunate waste of recources to criminalise and imprison many low level cannabis users and dealers. However, there are positive signs with the proposed declassification of cannabis and moves generally to deal with offenders who would have been subject to short prison sentences effectively in the community instead (Justice for All, 2002; A consultation document on the government's strategy on restorative justice 22.7.03). The need for effective partnership working both at National and local level to address what is demonstrated by research to be a complex problem is recognised and that no single agency has the ability or resources to cope in isolation. Drug Action Teams co-ordinate the local response to drugs assisted by the Drugs Prevention Advisory Service who disseminate best practice from emerging evidence. The National Probation Service is a key player in delivering the National Drugs Strategy in partnership primarily, with Criminal Justice Drugs Teams to offenders who misuse substances at local level. ...read more.

To this end maintaining a close working relationship with the Criminal Justice Worker with overall responsibility for providing treatment under the Order is an essential networking skill for a probation officer. Stringency of the order is maintained by regular court reviews to monitor progress. In an enlightened article in The Times (2002) Judge Barrington Black acknowledges the need to consider more constructive solutions to the problems of criminals with a habit underlining the government's finding in the Strategy. Probation Officers clearly need the co-operation of the judiciary and magistrates in accepting their recommendations for a DTTO on an offender's behalf. The Judge cites the case of an offender aged 40 who had been given the full range of disposals for burglary including 5 prison terms which 'held no fear for him' and had been a hard drugs user for 15 years. The Judge was persuaded to impose an 18 month DTTO due to the offender indicating in prison he wished to 'chuck the habit'. Only 13 months later it was revoked for good progress and a few days later he received his first job offer in 20 years. The judge goes on to describe the changing role of the judiciary in ensuring the success of these orders by monitoring and encouraging progress in a less formalistic manner than the usual court room atmosphere. Forging links with such enlightened members of the judiciary may be a positive role for the future probation officer in an attempt to make real progress on reforming substance misusing offenders,. (2) Further alternatives to custody Further moves toward treatment of substance misusing offenders as opposed to punitivism where the emphasis is on punishment and imprisonment may be the only way to address the serious social implications of their offending. Punitiveness may still have a place for those who are not motivated to change as offenders themselves acknowledge but the coercion involved in getting those offenders to effectively choose between treatment or prison may be a necessary one to increase motivation given the seriousness of the problem. ...read more.

Those found in possession for personal use should be targeted as opposed to drug traffickers for whom different protective and deterrent policy considerations apply. (5) Drug misuse and social exclusion The Advisory Council on the Misuse of Drugs (1998) acknowledges drug misuse as having a central role in homelessness. Homeless people are likely to use a wider range of illicit drugs than the general population (Craig et al, 1996; Smart and Adlaf, 1991). Research by Fitzpatrick et al (2000) indicates that homeless drug users are at greater risk in their drug taking patterns and behaviour. The above factors indicate the importance of the probation service tackling social factors such as housing in addressing what may clearly be criminogenic needs directly linked to offending, but struggle with resources and rely very much on the voluntary sector, e.g. Syrenians. Drug misuse is also more prevalent among those experiencing disadvantaged circumstances and social exclusion (Smart and Obsorne, 1994). Homelessness may arguably be the greatest of such disadvantages. Figures produced by Home66% Carlen (1996) and 76% DrugScope (2000) found that 66% and 76% of young homeless people use drugs. Drug misuse may be a consequence of homelessness by young people or a means of coping with it and may perpetuate the situation (Britton et al, 2000:6). Other factors clearly linked to offending behaviour such as unemployment are clearly interrelated with homelessness in that the lack of an address in itself can making it impossible to gain employment. Conclusions From the writer's discussions with individual probation officers it is clear they recognise that in spite of government legislation it is essential not to entirely lose sight of the services' social work routes in order to genuinely help offenders. Those who misuse substances invariably have the greatest degree of problems and need for care, empathy and understanding. Contact with criminal justice agencies can become a vigorous opportunity for change. Ensuring the system is structured to make rehabilitation back to a healthy and safe lifestyle a much more likely outcome is a major challenge to those involved in reducing the harm caused by substance misuse. 1 ...read more.