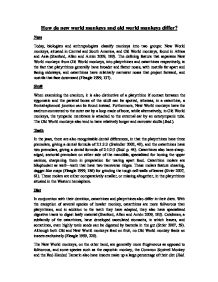 57). To further illustrate this, in the pygmy marmoset, as much as eighty percent of its feeding time is devoted to a range of exudates, and the remainder to animal prey solely, such as tiny insects and amphibians (Y�pez, et al., 2005, cited by Strier, 2007 p. 57). Locomotion, stationary posture and size Marmosets and tamarins, members of the platyrrhine family of Callitrichidae, have also developed claws on their big toes, "an adaptation that enables them to cling to the sides of large tree trunks to feed on gums, saps" (Fleagle 1999, 160) "and cryptic prey on trunks and in tree holes" (Ibid. p. 172). In terms of the locomotion of New World monkeys, being relatively more arboreal than the catarrhines, some leap from tree to tree, some travel on all fours along the branches, and for larger species, such as the Red-Faced Spider Monkey, or the Red Howler Monkey, suspensory postures have been documented (Ibid.). Some spider monkeys even habitually use their "tails and arms as pendulums to swing through the canopy" (Strier 2007, 57). While these platyrrhines use their tails to support their own bodies, to help them keep their balance as they move along branches, ...read more.

57). Social groupings New World monkeys have diverse social organizations, from monogamous groups demonstrated in titi, saki and night monkeys, to large groups of intergendered spider monkey societies. Also, howler monkeys live in single-male groups, while capuchins and squirrel monkeys live in complex groups of several adults (Ibid. p. 172-3). In contrast, Old World monkey monogamy, or intergendered groupings, are rare, and most groups consist of single-male or multi-male, female kin-bonded societies (Fleagle 1999, 220). Evolutionary success Although they all share similar social orders, these catarrhine groups inhabit a wider range of latitudes, climates and vegetative regions than the platyrrhines (Fleagle 1999, 186). This may be due to their terrestrial locomotor potential, their manipulative abilities, and higher intelligence (Stanford, Allen and Ant�n 2009, 440), and the fact that they can access a wider range of foods and environments. They are also more prolific breeders (Fleagle 1999, 220). While the platyrrhines are much more assorted in their social systems, they occupy a narrower variety of niches than the catarrhines (Stanford, Allen and Ant�n 2009, 182), and due to this, it can be supposed that the Old World monkeys are evolutionarily more successful. ...read more.