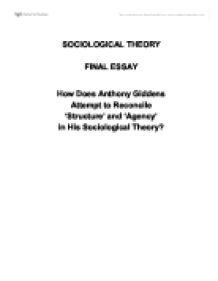 How Does Anthony Giddens Attempt to Reconcile 'Structure' and 'Agency' in His Sociological Theory?

Land and technology for example are not a resource until we do something with them (Haralambos and Holborn 1997:904). Authoritative resources are non-material resources, based on individual power and how we, as agents, use that power, be it persuasively, or through coercion, to dominate others and have them do our bidding. As with allocative resources, authoritative resources are not in fact a resource until someone actually uses it on another. Furthermore, [structure(s)] exist only as memory traces, the organic basis of human knowledgeability, and is instanciated in action (Giddens, A. 1984:377). It is the minutiae of every-day activities - those which go unnoticed, that allow the binding of time and space in social systems and so it is you, I, and every other individual that creates structures (Haralambos and Holborn 1997:904). Agency, whilst being closely bound to structure through the 'duality of structure', is defined by Giddens as being the mutual knowledge of the agents involved. He argues we know how to act in public, we know what is expected of us as workers, friends, enemies, mothers and fathers etc. The routine minutiae of every-day activities, as mentioned above, is carried out with little or no thought; this is because, we, as agents, call upon our mutual knowledge of the rules of our surrounding society. Giddens further argues that whilst agents also make use of the resources that are also part of the structure of society (ibid. 905) ...read more.

Cambridge: Cambridge University Press. In Ritzer, R. 2000: 528) also appears to be quite scathing in her critique of Giddens's Theory of Structuration. As opposed to Giddens, Archer argues that, although interconnected in social life, structure and agency form very distinct areas for investigation. She continues, obviously with Giddens in her sight [that] too many have concluded too quickly that the task is therefore how to look at both faces of the same medallion once ... [This] foregoes the possibility of examining the interplay between them over time ... Any form of conceptualization which prevents examination of this interplay should therefore be resisted. (Archer. M. 1988. In Ritzer. R. 2000:528). Having established the major differences between other sociological writers and Giddens's definitions of 'structure' and 'agency' we can certainly understand why there should be such a wide-ranging debate. The main problem, as far as I understand, apart from the obvious "definitions" standpoint, is that of Giddens's point-blank refusal to move from his position that structure and agency are fundamentally locked. Perhaps he did not want to be seen to do the same as his predecessors and place more emphasis on 'structure over agency' or vice versa. Unfortunately, we will only have the clarification we desire when Giddens produces follow-up theory. If he does produce a more detailed theory that can be applied to social life, then maybe we will have a clearer understanding of, not only the 'definition', but also the true 'relationship' between social 'structure' and social 'action'. ...read more.