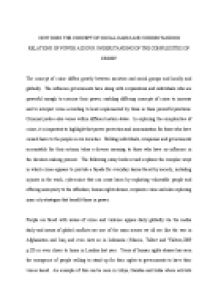 ï»¿HOW DOES THE CONCEPT OF SOCIAL HARM AND UNDERSTANDING RELATIONS OF POWER AID OUR UNDERSTANDING OF THE COMPLEXITIES OF CRIME? The concept of crime differs greatly between societies and social groups and locally and globally. The influence governments have along with corporations and individuals who are powerful enough to exercise their power, enabling differing concepts of crime to increase and to interpret crime according to laws implemented by those in these powerful positions. Criminal justice also varies within different nation states. In exploring the complexities of crime, it is important to highlight that power protection and immunisation for those who have caused harm to the people in our societies. Holding individuals, companies and governments accountable for their actions, takes a diverse meaning to those who have no influence in the decision making process. The following essay looks at and explores the complex ways in which crime appears to provide a façade for everyday harms faced by society, including injuries in the work, cybercrime that can cause harm by exploiting vulnerable people and offering anonymity to the offenders, human rights abuses, corporate crime and also exploring inner city strategies that benefit those in power. People are faced with issues of crime and violence appear daily globally via the media daily and issues of global conflicts are one of the ...read more.

The West has laws against forcing children to work and the act of doing it is seen as a criminal offence. The scale of trafficking is difficult to calculate and is in part because if the definition throughout the world that trafficking as a crime has as in some countries it is not seen as one. In some countries like Asia, poor families may be induced to sell or hire their children or young children to go to work or trafficked in order to survive and to give the family a better life. (Westmarland, 2009, p.118-129). The social harm this causes by children working in these poor conditions and for the long hours for pitiful monetary rewards is bad enough but they can also experience violence and demeaning treatment. There are questions if this treatment and the high volume of child labour are connected to the Wests demand for cheaper high volume goods. (Tombs, Whyte, 2009, p.139). This is classed as corporate harm and corporate crime. Some companies in the West are aware of this kind of transgressions of these harms regarding children and young children working in these countries and there are suggestions that the most serious social, environmental and economic harm operate beyond the borders of the nation state. ...read more.

Agencies that regulate and try to intercept those that cause harm have an enormous task in doing so. Social harm and violence and the power it holds can be seen within cyberspace and the new unconventional crimes that are committed through the internet will only grow globally. I also discussed corporate harm and how negligence caused deaths and suffering to many and how the corporate crime of negligence may more that often is not treated in the law as criminal and criminal charge and punishment of the corporations is not up held. The global corporations use their power and financial position to hide behind as in Bhopal. Using the example of Managua, the regimes where highlighted and the changes that occurred did not necessarily help the population as a whole. Even though the changes were intended to improve lives to those in the city, it faltered when it was confronted by the challenges from the right wing regimes and external influence of the US. The state crime was seen to be violating many human rights of the citizens in order to get deviant organisational targets. Using the evidence, looking at social harms and trying to understand the relationship of power and the powerful, it can aid our understanding of the complexities of crime and how the concept of crime differs greatly between different societies and social groups, locally and globally. ...read more.