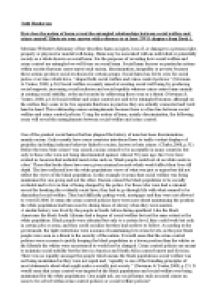 How does the notion of harm reveal the entangled relationships between social welfare and crime control?

The law enforcers became the criminals to society by refusing to help those in need to protect the welfare of those who were not affected. We have to remember that those people reporting these facts were the victims and would therefore have not considered the welfare of those who were in the protected areas. It would be wrong to imply that crime was not a concern, because it was. Neumayr believes that Katrina just exposed the extent of the crimes that were already occurring in New Orleans. (Neumayr quoted in Mooney,G,2008,p.107) Were the people to blame for not having social services available to them? US government policy seemed to blame the poor for their situation and it showed through their budget cuts on social services to construct the, ?vast homeland security and anti-terror drive? (Graham, 2006, pp.109) Although anti terror drives were important and seen as a means of social welfare especially after 9/11, theses crime control policies to maintain the peoples well being actually stole from the resources the people needed at the time Katrina hit. The key institutions of social welfare including health, security, shelter and education were not available and thus a social divide was formed. ...read more.