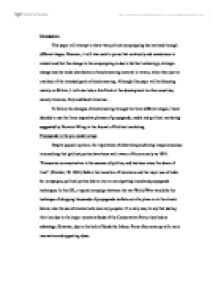 This paper will attempt to show that political campaigning has evolved through different stages. However, it will also seek to prove that continuity and consistence is evident and that the change in the campaigning is due to further technology, strategic change and the wider distribution of electioneering material to voters, rather than just an overhaul of the intended goals of electioneering. Although this paper will be focusing mainly on Britain, it will also take a brief look at the development in other countries, namely America, Italy and South America.

To follow the changes of electioneering through the three different stages, I have decided to use the three respective phrases of propaganda, media and political marketing suggested by Dominic Wring in the Journal of Political marketing.

Propaganda in the pre-modern stage

Despite popular opinion, the importance of advertising and being image conscious is something that political parties have been well aware of from as early as 1918. “Persuasive communication is the essence of politics, and has been since the dawn of time”. (Fletcher, W. 1994) Before the invention of television and the major use of radio for campaigns, political parties had to rely on word getting round and propaganda techniques. In the UK, a typical campaign between the two World Wars would be the technique of dropping thousands of propaganda leaflets out of a plane on to the streets below; also the use of cinema halls was very popular. It is very easy to say that during this time due to the larger monetary funds of the Conservative Party, they had an advantage. However, due to the lack of funds the Labour Party often came up with more innovative and appealing ideas.

“Campaigning has always had a marketing character. The new ‘methodology’ is not the introduction of marketing methods into politics, but an increased sophistication and acceleration in their use”. (Kotler, P. 1982) Political parties still had to market themselves but it tended to be to a much smaller audiences on a large scale. The goal has not changed, parties have always sought to retain their followers and activate them to vote whilst attempting to ensnare ‘floating’ voters. However, the means by which they could promote themselves has become more vast and effective.

When watching promotional films that would be aired in cinema halls it was evident that in the UK the Conservative and Labour parties took very different approaches. Although both using ‘propaganda techniques’ the material for the Labour Party was trying to promote the ‘educationalist’ view. This meant that they were trying to better inform voters and used projections of a working class man explaining the threats of having a Conservative leadership and what needed to be done to ‘save’ the country; whereas, the Conservative broadcast seemed to use more persuasive techniques. They chose to entertain and show landscapes rather than people whilst placing a positive spin on the current situation of the country.

The Labour ‘educationalist’ view should have appealed to the masses, however, it has to be remembered that these films would have seemed very exciting and technologically advanced to its viewers and the audience were more interested in being entertained then preached to.

In English, the word "propaganda" now carries strong negative connotations, although it has not always done so. It was formerly common for political organisations, as it had started to be for the advertising and public relations industry, to refer to their own material as propaganda. Because of the negative connotations the word has gained, today it is uncommon to admit producing propaganda, although opposing parties sometimes accuse each other of producing propaganda.

Media in the modern stage

It is often suggested that the campaign effort of the Conservative Party in 1979 was the beginning to a new era concerning electioneering and political marketing. The widespread introduction of new media outlets meant that there were more opportunities to promote a party then ever and this exacerbated the need for more coherent party image management. Many are convinced that the Conservative’s use of Saatchi and Saatchi advertising company was paramount to their victory of holding government for three consecutive terms. “The execution of the 1983 and 1987 general elections consolidated the idea that professional consultants were becoming an indispensable part of the modern electoral process”. (Wring, D. 2002)

Thatcher also inherited responsibility for the national television network when she won the election in 1979 and although it was ‘publicly owned’; the British system meant that it was also privately funded. Some claimed that rather than furthering and expanding the knowledge of viewers, the television was in fact a “system in which two powerful institutions responsible not to the public but to the real, though hidden, pressures of the power elite, government…..manipulate the public in the interest of that power elite and socialise the individual broadcaster so that he collaborates…almost unconsciously”. (Garnham, 1978, p16)

Prior to 1962 election, Labour had attempted to revolutionise its presentation and develop the use of radio and television broadcasting opportunities. Labour drew volunteers from commercial marketing backgrounds to help them modernise, their good work helped to reiterate the importance that “good communications were becoming an integral part of electoral success”. (Wring, D. 2002) However, after a Labour loss at the 1970 election, scepticism returned and organisational issues became the focus of the debate within the party. Some believe that this withheld progression of the development of their strategy.

The retirement of Harold Wilson as Party leader in 1976 marked an obvious loss of commitment to marketing from the Labour Party as the successor seemed to have little time for strategic matters.

Dominic Wring rightly highlights that it was “ironic that the most traumatic Labour campaign of modern times, in 1983, was also the first in which the party formally retained the services of an advertising agency”. (Wring, D. 2002) It is believed that the reason for this apparent lack of success was due to the isolation of the advertising company due to organisational problems. It was these problems that caused the new leader, Neil Kinnock, to rejuvenate and focus energy on the campaign’s organisation and the use of political marketing techniques.

Political Marketing in the post-modern stage

Let us start with a definition of political marketing. It can be defined as:

“…the application of marketing principles and procedures in political campaigns by various individuals and organisations. The procedures involved include the analysis, development, execution and management of strategic campaigns by candidates that seek to drive public opinion, advance their own ideologies and win elections” (Kaid, L. 2004)

The most important piece of political marketing for the Labour Party, as I stated earlier, was during the leadership of Neil Kinnock. The strategic development of the Party was obvious and the “application and usage of marketing from the mid 1980’s onwards has led to important structural changes within the Party which have collectively combined to afford the leader and his aides greater power over all other section”. (Wring, D. 2002)

During the last decade there is evidence of the rise of the 'post-modern' campaign marked by several related developments: the fragmentation of television outlets, with the shift from national broadcasting towards more diverse news sources and 24-hour rolling news bulletins; the opportunities for newer forms of party-voter interaction facilitated by the rise of the Internet; and the attempt by parties to reassert control in a more complex, fragmented and rapidly changing news environment through strategic communications and media management during their campaigns, with the continuous feedback provided by polls and focus groups, not just campaigns.

This paper has mainly concentrated on the evolving of British campaigning methods; however, we have seen similar but more extravagant changes and continuity in America. American campaigning methods have changed significantly since 1945 due to “declining party identification, participation in the electorate and the growing impact of the media and other communication technologies, the greater involvement of independent, professional consultants and technical experts in the management of campaigns, changes in the laws regarding elections and campaign finance, the extended duration of campaigns and the increased resources available to incumbent candidates.” (Forster, J. and Muste, C. 1992) This has created a more candidate-focused campaign process than any other country in the World. Rather than promoting policies or the parties themselves; modern day American campaigning is about the face that fronts a party. It has been said that many campaign processes over the World have become more americanised, this is not to say that their process is the best and most effective but it is noticeable that most changes in other countries have derived from American processes.

Even the Italian political system which has been long renowned for its inert qualities, for its resistance to change of all types has “evolved radically as new techniques and codes of campaigning were widely adopted. Not only did television become more important than ever before but party-centred rallies, posters, and word of-mouth strategies were displaced by media-orientated forms of political communication in which the emphasis shifted from parties towards leaders and candidates.” (Gundle, S. 1992) However, although it seems that the Italian electioneering process has been americanised, many argue that it has had nothing to do with the system being americanised but just from the modernisation, use and advancement of technology.

In Latin America, despite being held under largely varying circumstances, within the same country, elections in the modern urban areas tend to mimic that of American election. Whereas, in the more backward rural areas the politics is largely decided due to patronage or clients. A lot of these Latin American countries have adopted techniques of modern electioneering but have failed to change or modernise their political systems. Compared to the 1950’s, all of these countries have become substantially more ‘urban’ and have greater access to media sources; particularly television. Their dominant form of television campaigning could be argued to be more Americanised then most of Europe. Citizens react to the campaigning personalities with much interest and it appears to be more of a greater event then in other European countries.

Conclusion
“Change is more or less constant in the customs and practices of seeking office and, in any given country; no election campaign is precisely like any other”. (Swanson, D. 1996) However, more recently it has become evident that common patterns have emerged within the types of innovations being used in campaigns.

It is difficult to differentiate between campaigns becoming more Americanised or just evolving with modern day technology and media. It is safe to say that due to the mass media that now exists, image and perception has become a major factor in campaigns.

Rather than claiming that all campaigns are inevitably moving into the post-modern category, we must remember that many campaigns still remain in the pre-modern to the post-modern, due to the influence of a range of intermediary conditions such as the electoral system, campaign regulations, and organisational resources. It seems more accurate to understand the changes in campaigning as part of the modernization process rooted in technological and political developments common to many post-industrial societies.

Wring, D. (2002) “Images of Labour: The Progression and Politics of Party campaigning in Britain” Journal of Political Marketing

Fletcher, W. (1994) How to capture the advertising high ground