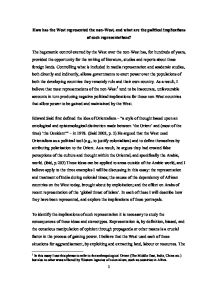 How has the West represented the non-West, and what are the political implications of such representations?

How has the West represented the non-West, and what are the political implications of such representations? The hegemonic control exerted by the West over the non-West has, for hundreds of years, provided the opportunity for the writing of literature, studies and reports about these foreign lands. Controlling what is included in media representation and academic studies, both directly and indirectly, allows governments to exert power over the populations of both the developing countries they remotely rule and their own country. As a result, I believe that most representations of the non-West1 tend to be inaccurate, unfavourable accounts in turn producing negative political implications for those non-West countries that allow power to be gained and maintained by the West. Edward Said first defined the idea of Orientalism - "a style of thought based upon an ontological and epistemological distinction made between 'the Orient' and (most of the time) 'the Occident'" - in 1978. (Said 2003, p. 2) He argued that the West used Orientalism as a political tool (e.g., to justify colonialism) and to define themselves by attributing polarisation to the Orient. As a result, he argues they had created false perceptions of the culture and thought within the Oriental, and specifically the Arabic, world. (ibid, p.203) These ideas can be applied to areas outside of the Arabic world, and I believe apply to the three examples I will be discussing in this essay: the representation and treatment of India during colonial times; the causes of the dependency of African countries on the West today, brought about by exploitation; and the effect on Arabs of recent representation of the 'global threat of Islam'. In each of these I will describe how they have been represented, and explore the implications of these portrayals. To identify the implications of such representation it is necessary to study the consequences of these ideas and stereotypes. Representation is, by definition, biased, and the conscious manipulation of opinion through propaganda or other means is a crucial factor in the process of gaining power. ...read more.

In doing so, they created an idea of Indians as the polar opposite to the west. More than just opposite to these people, the experience of conquering these people thus served to define Europeans as coloniser. Without having conquered these people, Europeans would thus lack this perception of themselves. (Hall 2003, p. 13) The tribespeople demonstrated all the qualities the British were not, and created a sense of the "irreducible distance separating white from colored" (Said 2003, p. 228). Another legacy of colonialism is that of dependency, evident between African ex-colonies such as Kenya and Britain. Political advantages can be gained through representing foreign regions in ways beneficial to the controlling country. The theory of dependency suggests that undeveloped states are exploited by wealthy, developed nations in order to sustain the economic dominance of the latter. The governments of richer nations are able to maintain this relationship, by establishing trade laws, political initiatives, and through media influence in these regions. Attempts to resist such a situation by the developing nations may result in economic sanctions, further disadvantaging the economy of the controlled nation. Dependence develops in a situation where the economy of one country is conditioned by the development and expansion of another economy to which the former is subjected. (dos Santos in Seligson and Passe-Smith, 1998, p. 252) The result of this situation is that underdeveloped countries trapped in this position fail to modernize due to the restrictions of the arrangement. The trade within the relationship is usually part of a monopolised market, and many businesses in the under-developed country are opened using capital loaned from foreign investors. The interest rates imposed allows the retention of foreign control as the surplus produced, and the profit made, is all returned to the investors and thus the local businessman cannot improve his output. To cope with the increasing outgoings, any profit is invested in increasing manpower to meet demands, rather than developing new technology to keep up with the global market. ...read more.

The political implication of the negative stereotypes described above - na�ve, lazy Indians; needy, incapable Africans; evil, tyrannical Arabs - is the perpetuation of the power balance between the West and the non-West. The Western governments can maintain their hegemony through the control of other governments, and continue to direct the dominant discourse and the repression of the non-West. The link between these three examples is that of a l**t for resources by the West - and so they exploit their non-West counterparts to gain these. Western knowledge of the rest of the world has been shaped by this greed for power, (Clifford 1988 p. 255) and gained through a struggle to obtain land. By 'othering' the non-West, and creating an 'us' and 'them' divide, the West creates an atmosphere in which arguably unethical actions against others seem more legitimate. But it is important to consider the consequences of such stereotyping on groups caught between the dichotomy of West and non-West - for example, what of the second and third generation Asian population in Britain? Caught between a Muslim home life and white peers they cannot relate fully to either group, and thus identity crisis is commonplace - and can be preyed on by extremists (http://digital.guardian.co.uk.ymogen.net/guardian/2007/05/12/pages/ber33.shtml). This misrepresentation will continue as long as the public continue to accept the stereotypes created by these Western powers. The polarisation between the West and non-West must be removed, or at least, as Clifford states, "[all dichotomising events should] be held in suspicion" (1988, p. 255), through the questioning of representation and the demand for fairer treatment in the media and politics to allow the World to become more equal. It is important for the public to encourage this "norm against noticing" r****t behaviour (Vitalis 2000, p. 332); but it is up to the government to alter the dominant discourse: to demonstrate that it is not only the non-West that are 'others' - to them, we as the West are 'others' also. ...read more.