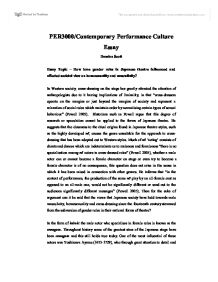 How have gender roles in Japanese theatre influenced and affected societal view on homosexuality and masculinity?

PER3000/Contemporary Performance Culture Essay Damian Scott Essay Topic - How have gender roles in Japanese theatre influenced and affected societal view on homosexuality and masculinity? In Western society, cross-dressing on the stage has greatly attracted the attention of anthropologists due to it having implications of liminality, in that "cross-dressers operate on the margins or just beyond the margins of society and represent a relaxation of social rules which maintain order by normalising certain types of sexual behaviour" (Powell 2005). Historians such as Powell argue that this degree of research or speculation cannot be applied to the forms of Japanese theatre. He suggests that the closeness to the ritual origins found in Japanese theatre styles, such as the highly developed no, causes the genre unsuitable for the approach to cross-dressing that has been adopted out to Western styles. Much of no 'acting' consists of chants and dances which are indeterminate as to maleness and femaleness "there is no specialisation among no actors in cross-dressed roles" (Powell 2005), whether a male actor can or cannot become a female character on stage or even try to become a female character is of no consequence, this question does not arise in the sense in which it has been raised in connection with other genres. ...read more.

(Powell 2005) It is evidently clear that in Western society when gender roles are subverted in theatre, the director has made a conscious decision to alter the expected sex of one their characters. Common examples of this are Japanese directors who have staged shows in Western culture but consciously subverted the roles. Ninagawa Yukio cast a male in the part of Medea in a Japanese production of the play in Edinburgh and Athens. Suzuki Tadashi has directed an all-male King Lear and has also cast a woman as the Danish prince in a production of Hamlet (Edmonds 1992). In such productions it is usually clear that these changes have been made due to theories of sexual politics and are seen to be "subverting received perceptions of the role concerned, subverting theatrical norms in cultures where cross-dressing is the exception, subverting accepted gender relationships based on male/female dichotomy" (Shaw and Ardener 2005). Yet in forms of Japanese theatre such as kabuki there is a distinct difference to those that intentionally chose to cross-dress and become 'unconventional', wherein kabuki is completely conventional in a theatre culture where traditionally conventions are quite powerful. How though does this affect and reflect societal view? ...read more.

"[Japanese Buddhist priests] are drawn to sins against nature and don't deny it, they acknowledge it openly. This evil, moreover, is so public, so clear to all, men and women, young and old, and they are so used to seeing it, that they are neither depressed nor horrified." (Francis Xavier 1549) It is can be seen, through much historical evidence, that homosexuality and the feminization of Japanese men was occurring long before, during, and after the height of theatre styles such as kabuki. Whether or not this was a blatant crisis for male masculinity is hard to say. Homosexuality, or a better term for it, male love, was a common tradition. The love of chigo (a boy aged 10 to 17) by Buddhist priests was customary and widely accepted as was the love of wakashu (a youth aged 13 to 20) by samurai warriors It wasn't until heavy Western influence did the Japanese people begin to see male-male sexual activity as 'wrong' and an 'evil doing'. So then could it be said that in fact there was no inherent problem with homosexuality in Japan nor were the walls of masculinity destructively crumbling down? It could though perhaps be acknowledged that theatre was not a direct cause of this view and crisis but instead a humble and widely enjoyed reflection of it and the world it encumbered. ...read more.