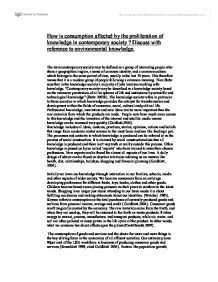 How is consumption affected by the proliferation of knowledge in contemporary society ? Discuss with reference to environmental knowledge

How is consumption affected by the proliferation of knowledge in contemporary society ? Discuss with reference to environmental knowledge.

The term contemporary society may be defined as a group of interacting people who share a geographical region, a sense of common identity, and a common culture which belongs to the same period of time, usually in the last 10 years. This therefore means that it is a modern group of people following a common meaning. Nico Stehr  says that in the knowledge society a majority of jobs involves working with knowledge. “Contemporary society may be described as a knowledge society based on the extensive penetration of all its spheres of life and institutions by scientific and technological knowledge” (Stehr 2002b). The knowledge society refers in particular to those societies in which knowledge provides the catalyst for transformation and development within the fields of economic, social, cultural and political life. Professional knowledge, innovation and new ideas can be more important than the raw materials from which the products are made.  People now have much more access to this knowledge and the invention of the internet and satellite media means knowledge can be accessed very quickly (Goldbatt,2004).

Knowledge includes all ideas, customs, practices, stories, opinions, actions and beliefs that range from academic rocket science to the most basic routines like feeding a pet.  The processes and contexts in which knowledge is produced can be referred to as the process of social construction. It is claimed by social constructionalists that all knowledge is produced and there isn’t any truth or reality outside this process. Often knowledge is passed on by so called ‘experts’ who have trained to enter their chosen professions. Now experts can be found for almost all aspects of our lives. A daily deluge of advice can be found on daytime television advising us on matters like health, diet, relationships, holidays, shopping and financial planning (Goldblatt, 2004).

Initially we learn our knowledge through interaction in our families, schools, media and other aspects of wider society. We become consumers from an early age developing preferences for different foods, toys, books, clothes and other goods.  Children become brand aware placing pressure on their peers to conform to the latest trends. Shopping is no longer just about attending to our basic needs it is about fulfilling our desires and making statements about our identities. (Watchel, 1983).

Keynes refers to consumption as the total purchases of currently produced goods and services from personal income, savings and credit ( Goldblatt,2004). Consumer goods aren't magically created by the economy. The raw materials come from the Earth, and when they are used up, they will be returned to the Earth as waste products. It takes energy to extract, process, manufacture, and transport products, while air, water, and soil are often polluted at many points in the life cycle of the product. In other words, what we consume has direct effects upon the planet.(David Suzuki, 2007).

The consumption of goods and services and the desire for more and more things is the key driving force in the economies of all affluent societies. One estimate places 90per cent of the USA workforce in business of producing consumer goods and services (Rosenblatt 1999, cited Goldblatt 2004). Factors like population growth, increased home building and rising incomes means increasing demand for energy. This consistently offsets any technological efficiency gains from energy saving products. ( van der Wal 1998 cited Goldblatt 2004). These phenomena reflect significant social transformations in values and lifestyles. Self-fulfillment, personal development, independence, and other hallmarks of individualism have increased in social value (van Diepen 1998).

This increased demand for goods and services places huge demands upon the raw materials and fossil fuel resources of the planet. Political ideologies and organizations have attempted to offer solutions to the environmental problems which have been created by industrialized societies. These problems include climate change, conservation, intensive farming, nuclear issues, dams, deforestation and resource depletion. The most urgent environmental problems under threat of irreversible damage are associated with resources that are regenerative but are undervalued like timber and fish. Air and Water are renewable but have a finite capacity to assimilate emissions and wastes. If pollution exceeds this capacity then ecosystems can deteriorate rapidly. When fisheries and forests are excessively depleted critical thresholds can be passed resulting in the loss of ecosystems and species. (Goldblatt, p90 2004). We are now encouraged to use less energy, recycle and purchase environmentally friendly goods. This is done by knowledge transfer through educational establishments, news outlets, local and national government initiatives, wildlife and political documentaries. Also political organizations and the scientific community highlight these issues and increase pressure upon political leaders to adopt environmentally friendly policies. (S.R. Weart, 2003). ‘Green politics have now moved to the centre stage since the 1970’s with all political ideologies now professing to be green’ (Goldblatt p88, 2004).

Manufacturers and retailers aware of new European legislation and also changing attitudes of consumers within the knowledge economy have altered their manufacturing processes and marketing strategies to remain competitive. Electrical goods now have energy ratings and are becoming more efficient. Cars are using less fuel and being made from lighter materials and creating less emissions as technology advances. Food in supermarkets supplies more information and organic foods can command a premium.  ‘The trend is such that consumers tend to become more environmentally aware, this is the current trend in some major European Union countries, then they might be willing to pay more for the biodiversity-friendly products. On the contrary, consumers in the developing countries tend not to have a high willingness or ability to pay for the environmentally friendly products.’ (S. Krarup, C.S. Russell, 2005)

Liberalist thinkers use increased consumer knowledge and the markets response as an argument that the market can correct environmental harm by its self. However social democratic, conservative and feminist ideologies argue that it cannot be left to the market to self police itself as the current market has no interest in helping future generations.  Social democrats believe that some of the planets resources like rain forests and oceans should be world assets rather than owned by individual countries. These resources are often called ‘global commons’.(Goldblatt, p84, 2004). Those environmental problems which are often regarded as examples of market failure, the problem can be one of externalities or the inadequate provision of public goods. Some environmental problems cross borders in an unidentifiable direction arising when one states economic activity produces harmful effects in another state. (Goldblatt, p96). An example of this would be acid rain in Scandinavia caused by British power plants. The Swedish market or consumer would find it difficult to influence the activities in another country.

Conservativism is more a reactive ideology skeptical of both democracy and the market. It wishes to conserve what we already have. It as been described as the ‘politics of imperfection’ (Quinton cited Goldbaltt 2004).

Feminist thinking on the environment can be very diverse and overlap with other thinking. However radical eco-feminism offers an extremely different perspective. They reject the idea of human first anthropocentricism ideology. They put forward ecocentric and biocentric theories which they argue respect the whole ecosystem.

Vandana Shiva argues that the current political system, scientific development and world economy as a patriarchal project of domination which can dispense with both women and nature. ‘The reductionist and universalizing tendencies of such science become inherently violent and destructive in a world which is inherently related and diverse. The feminine principle becomes an oppositional category of non-violent ways of conceiving the world, and acting in it to sustain all life by maintaining the interconnectedness and diversity of nature.’ (Shiva 1989, cited Goldblatt,2004 p110).

So although women may have some agency in their consumption choices they ultimately lack power in the overall western capitalist system. ‘At the same time, however, we must assume that 'agency 'is part of simply being a human, and thus its absence or denial is as much of a problem as its construction... a failure to recognize the absence of agency and legitimate intentionality must be seen very critically as effects of power.’ (Ortner, 1996 p10).

Changes in mass production techniques using computers and increased automation, has increased the output of goods and lowered prices through economies of scale. The concept of Fordism refers to the social process where workers share in the benefits of increased productivity by working less hours for relatively higher wages. Workers then have more time and money to buy the goods that they are producing. This has fuelled demand and there as been a move from production to consumption. This has led to increased labour levels in the growing UK service sector as jobs in manufacturing have been transferred overseas to places like China and India. The prosperous world economy and technological manufacturing processes means that people have increasingly been able to specialise in non manufacturing ‘professional occupations’ (Goldblatt, 2004). A lot of these low product prices have been created on the back of cheap energy and cheap raw materials which have been sourced while causing damage to the environment. There are large numbers of people who are in lower social economic groups in industrialised societies that must purchase the lowest price goods in order to survive. This need becomes more widespread in an economic slow down. Financial constraints will always restricted consumers abilities to purchase more expensive environmentally friendly goods regardless of their knowledge levels. It is the higher socio economic groups who have more access to knowledge and also the ability if they wish to purchase the higher priced fair trade goods and ethically friendly products. The existential risks of priced goods are difficult to evaluate for individual consumers as consequences are not transparent and immediate. Also there can be expert counter claims who question how much damage as been done and how it is being caused (Bostrom). Knowledge appears to be changing consumer behaviour but is a gradual and ongoing process.

Poverty of Affluence: A Psychological Portrait of the American Way of Life by Paul Wachtel. Free Press , 1983.

Making Gender: The Politics and Erotics of Culture by Sherry B Ortner, Beacon Press Books, 1996.

[a]The reference list covers all the important information but needs to be in a slightly different format.  Every book entry should be ordered : SURNAME, INITIALS (DATE) TITLE  PUBLISHER  PLACE.  Please check the notes from the beginning of the course to make sure you use the correct format for TMA06.