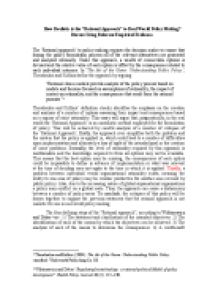 ﻿How Realistic is the ?Rational Approach? to Real World Policy Making? Discuss Using Relevant Empirical Evidence. The ?Rational approach? to policy making requires the decision maker to ensure that during the policy formulation process all of the relevant alternatives are generated and analysed rationally. Under this approach, a wealth of conceivable options is devised and the relative value of each option is offset by the consequences related to each individual outcome. In ?The Art of the Game: Understanding Public Policy?, Theodoulou and Kofinis define the approach by arguing: ?Rational choice models provide analysis of the policy process based on models and theories focused on assumptions of rationality, the impact of context on rationality, and the consequences that result from the rational pursuits.?[1] Theodoulou and Kofinis? definition clearly identifies the emphasis on the creation and analysis of a number of options assessing their impact and consequences based on a regime of strict rationality. This essay will argue that, pragmatically, in the real world the ?Rational Approach? is an unrealistic method employed for the formulation of policy. This will be achieved by careful analysis of a number of critiques of the ?Rational Approach?; firstly, the approach over simplifies both the problem and the system that the policy is applied in, which could ...read more.

However, in reality this will not prove to be the case and it will be possible for the omission of a policy option to occur and/or the prediction of the consequences of this policy will be impossible to predict ahead of actual implementation. For example, the current illegal substances policy is to tackle drugs as they ultimately lead to an increase in crime from addicts and a burden on the healthcare system. The government legislates to prevent importers from getting the drugs into the country. Thus the supply of drugs diminishes leaving a demand but smaller supply. This pushes the value of the substance up for everyone involved. The dealers respond by raising prices to reflect the value and cutting the drugs with other hazardous substances. Therefore, the addicts have to find more money to pay for the substance which ultimately leads to crime and the other substances that are mixed with the drugs leads to health problems and a burden on the healthcare system[7]. Whilst all of the relevant data provided to the policy makers would have detailed the consequences of this situation it would have seemed that the restriction of the quantities of drugs available would lead to a total stemming of the flow as the rationality would suggest. ...read more.

If this is true then it will leave incorrect policy being drafted and a conflict of that policy on other issues leaving a confused and contradictory body of policy. Furthermore, the policy being created will only be relevant in the time and environment it was created in not allowing for editing of the policy but new policy to be drafted. In doing so, this creates a staccato effect on policy development and evolution. Also, in forcing new policy to be created the money spent on the implementation of the previous policy is lost forcing more to be spent and adding to the overall cost of the policy. Lastly, the idea of individual versus organisational rationality is very important in the context of the analysis of this approach. Essentially the formulation of public policy will mainly be on a individual basis. Conversely the effects on the structure of the organisation and the other policy making entities in the organisation require consideration when decision making and this can be restrictive to the policy process itself, as shown previously. Therefore, from the arguments presented in this essay, it is evident that my initial statement questioning the use of this approach as a useful tool in real world policy making has been supported and a different approach or even a synthesis of approaches should be used to effectively formulate policy. ...read more.