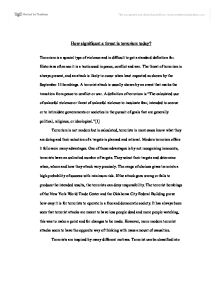 How significant a threat is terrorism today? Terrorists are inspired by many different motives. Terrorist can be classified into three categories, these are rational, psychological, and cultural.

How significant a threat is terrorism today? Terrorism is a special type of violence and is difficult to get a standard definition for. Historians often see it is a tactic used in peace, conflict and war. The threat of terrorism is always present, and an attack is likely to occur when least expected as shown by the September 11 bombings. A terrorist attack is usually shown by an event that marks the transition from peace to conflict or war. A definition of terrorism is "The calculated use of unlawful violence or threat of unlawful violence to inculcate fear; intended to coerce or to intimidate governments or societies in the pursuit of goals that are generally political, religious, or ideological."[1] Terrorism is not random but is calculated, terrorists in most cases know what they are doing and their selection of a targets is planned and rational. Modern terrorism offers it followers many advantages. One of these advantages is by not recognizing innocents, terrorists have an unlimited number of targets. They select their targets and determine when, where and how they attack very precisely. The range of choices gives terrorists a high probability of success with minimum risk. If the attack goes wrong or fails to produce the intended results, the terrorists can deny responsibility. ...read more.

All human beings are sensitive to threats to their own values by which they see themselves, these can include language, religion, group membership, and homeland or native territory. The chance of losing any of these can cause defensive reactions. Terrorism in the form of religion can easily become violent. Like all terrorists, those who are faithfully motivated see their acts as being for a just cause. What would otherwise be viewed as insane becomes a spiritual duty in the mind of a loyal religious motivated terrorist. This helps explain the high level of commitment to risk death among religious extremist groups. Terrorists organise to function in the environments where they plan to carry out their acts. Organisational details are situation-specific, there are, however, a few general organisational principles. Because terrorists must operate in a hostile environment, security is their key concern. Security is best served by a cellular structure in which members do not know and cannot identify more than a few of their social group in the event of capture or defection. Terrorist groups that are not supported by a government usually create a support structure of sympathisers and people who have been forced into helping them. The support structure may include active and non-active members. It places the active terrorists with logical support, intelligence, and distribution of propaganda, recruiting, and money. ...read more.

Although technology does help in the defense against terrorism, it does provide terrorists with increased opportunities to strike. Terrorists can operate in via the Internet to destroy or manipulate information for their own purposes and gain more support. Skilled terrorist hackers can access all but the most secure databases, allowing them to steal or change information or even destroy it.This gives them the for example, the power of manipulating the stock market for their own profit or to create a sudden inflation or depression. There has been evidence of large-scale counterfeiting of money to purchase weapons but this could be other threats for different countries and not just terrorists. Access to police and other security files can keep terrorists one-step ahead of their opponents, as well as chemical weapons becoming increasingly powerful and easy to get a hold of. To conclude it seems ever since September 11, 2001 with the attacks on America and its people, terrorism has become more of a well-known threat across the world. Terrorism has always been a wide based topic of interest, but now it is probably the number one topic on people's minds. Yet to assess the actually threat of terrorism is very difficult as it acquires assumptions based on past and future events. In reality, the danger of terrorism is minor, this is particularly true for those of us in the West. Historically, high casualty terrorist attacks have been remarkably rare. Also in relative terms, terrorism accounts for very few deaths on a global scale. ...read more.