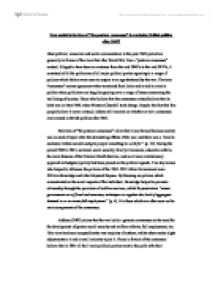 How useful is the idea of &quot;the postwar consensus&quot; in analysing British politics after 1945

How useful is the idea of "the postwar consensus" in analysing British politics after 1945? Most political, economic and social commentators in the post-1945 period are generally in favour of the view that after World War Two a "postwar consensus" existed. Alleged to have been in existence from the mid 1940's to the mid 1970's, it consisted of all the politicians of all major political parties agreeing to a range of policies which Britain were seen to require in an age shattered by the war. The term "consensus" means agreement when translated from Latin and is said to exist in politics when politicians are happily agreeing over a range of issues concerning the well being of society. Those who believe that the consensus existed believe that its birth was in May 1940, when Winston Churchill took charge. Despite the fact that few people believe it never existed, a debate still remains on whether or not a consensus ever existed in British politics after 1945. Believers of "the postwar consensus" claim that it was formed because society was in need of repair after the devastating effects of the war, and there was a "need to maintain civilian morale and give people something to work for" (p. ...read more.

Since the breakdown of the consensus, politics is seen to have become more divided. The question is, however, over whether or not the postwar consensus actually existed in the first place. Critics of the consensus are quick to point out that during the alleged years of the consensus, there was considerable disagreement between the main parties. In the view of Kavanagh & Morris (1989) the consensus does not explain the true reality of British politics: "disagreement about ends and means is the life blood of politics. Political disagreement arises inevitably from human diversity and clash of individual and group interests" (p. 10) Kavanagh & Morris look back to the views of Ben Pimlott, who believed that politicians in the 1960's and 1970's were divided on fundamental issues. Pimlott (1989) argues against the consensus by claiming that from the mid-1960s and onwards, Conservative opposition to the principles of universality became more and more significant. Two areas which Kavanagh & Morris believe help to support Pimlott's thesis are education and immigration. Evidence over the past few decades has shown that Conservative and Labour Governments have differed in their views of schooling. Having witnessed the Labour Government in 1965 make comprehensive education compulsory, the new Conservative Government withdrew the order in 1970. ...read more.

pre-1979 era: "The thesis's ability to organise a contrast between the pre-1979 and post-1979 eras and thereby provide definition to the extent of supposed transformation in both periods, has meant that the idea of consensus remains an important myth across the whole political spectrum" (p. 73) He claims that the consensus has limited appeal in attempting to explain the complex governmental activities which followed the war and instead only helps us to understand the contribution of ideas from people such as Keynes and Beveridge in the postwar era, as well as showing how Thatcherism managed to turn these elements upside down. The idea that a consensus existed between the mid 1940s after the Second World War until the late 1970s when Mrs Thatcher came into office has helped us to understand how British politics was generally in agreement over fundamental issues concerning the welfare of Britain. However, the view that such a consensus ever existed has been seriously contested, since many commentators have pointed to many areas where different political parties have been in disagreement and that changes in policies have only have always been challenged by the opposition. Even so, the idea of "the postwar consensus" has remained popular today and is taken for granted by many historical, political and social commentators, so its contribution to British politics can hardly be doubted. ...read more.