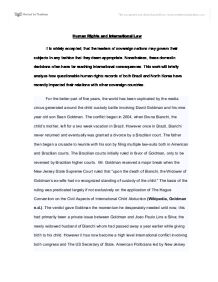 Human rights and International Law. This work will briefly analyze how questionable human rights records of both Brazil and North Korea have recently impacted their relations with other sovereign countries.

Human Rights and International Law It is widely accepted, that the leaders of sovereign nations may govern their subjects in any fashion that they deem appropriate. Nonetheless, these domestic decisions often have far reaching international consequences. This work will briefly analyze how questionable human rights records of both Brazil and North Korea have recently impacted their relations with other sovereign countries. For the better part of five years, the world has been captivated by the media circus generated around the child custody battle involving David Goldman and his nine year old son Sean Goldman. The conflict began in 2004, when Bruna Bianchi, the child's mother, left for a two week vacation in Brazil. However once in Brazil, Bianchi never returned and eventually was granted a divorce by a Brazilian court. The father then began a crusade to reunite with his son by filing multiple law-suits both in American and Brazilian courts. The Brazilian courts initially ruled in favor of Goldman, only to be reversed by Brazilian higher courts. Mr. Goldman received a major break when the New Jersey State Supreme Court ruled that "upon the death of Bianchi, the Widower of Goldman's ex-wife had no recognized standing of custody of the child." The basis of the ruling was predicated largely if not exclusively on the application of The Hague Convention on the Civil Aspects of International Child Abduction (Wikipedia, Goldman n.d.). ...read more.

conditions; prolonged pretrial detention and inordinate delays of trials; reluctance to prosecute as well as inefficiency in prosecuting government officials for corruption; violence and discrimination against women; violence against children, including s****l abuse; trafficking in persons; discrimination against black and indigenous persons; failure to enforce labor laws; widespread forced labor; and child labor in the informal sector. Human rights violators often enjoyed impunity." It is this exemption from punishment or oversight "In line with the military government's negotiated impunity upon the return of Brazil to democracy, impunity continues to derail human rights prosecution. Police and prison violence is often covered up or ignored by authorities. Police officers who are imprisoned often serve in privileged security positions inside Brazilian prisons. Brazilian politics are also rife with impunity, continued through dismissal of overzealous officials and pointed bureaucratic oversight." (Wikipedia, Brazil n.d.) Brazil makes no direct justification for its human rights record other than the fact that some traditions die hard, especially from a nation that is relatively new to the democratic free world. It was the opinion of the Brazilian courts that they as a sovereign nation had no obligation to adhere to the rule of American courts. Secretary of State Hillary Clinton led a delegation of influential US politicians who traveled to Brazil to negotiate the return of Sean Goldman to his father. Shortly thereafter, the Brazilian Government caved to the political pressure placed upon them by the US state Department along with Congress. ...read more.

In time President Obama was able to negotiate a high level sit down meeting with North Korea officials. He summons the assistance of Former President Bill Clinton to travel to Pyongyang to finalize the terms of the release of Ling and Lee. Finally on August 4, 2009 the journalist were released to Bill Clinton in an emotionally homecoming that received tremendous international media attention. Many observers believe that the detainment of the journalists was a direct response by Kim to the new sanctions placed upon the Korean regime by the UN Security Council stemming from the illegal nuclear test conducted last spring by North Korea. North Korea has become progressively belligerent towards the west as its position has been steadfast that: as a sovereign Nation, America nor anyone else in the world is in position to question or alter The Communist Republic of North Koreas selected courses of action. As one can see, the decisions of sovereign nations, and the political ramifications of their governance has a far-reaching impact beyond the domestic borders of a country. Many of our trade policies, Military agreements and other international treaties, are as a direct result of our willingness to participate in commercial and governmental transactions primarily with those countries whom we share a common bond philosophically as it pertains to the enforcement of basic human rights with its subjects. ...read more.