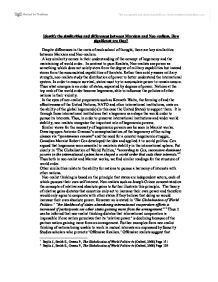 Identify the similarities and differences between Marxism and Neo-realism. How significant are they?

Identify the similarities and differences between Marxism and Neo-realism. How significant are they? Despite differences in the roots of each school of thought, there are key similarities between Marxism and Neo-realism. A key similarity comes in their understanding of the concept of hegemony and the maintaining of world order. In contrast to pure Realists, Neo-realists see power as something which does not solely stem from the degree of military capabilities but instead stems from the accumulated capabilities of the state. Rather than solely assess military strength, neo-realists study the distribution of power to better understand the international system. In order to ensure survival, states must try to accumulate power to remain secure. Thus what emerges is an order of states, separated by degrees of power. Nations at the top rank of the world order become hegemons, able to influence the policies of other nations in their vicinity. In the eyes of neo-realist proponents such as Kenneth Waltz, the forming of and the effectiveness of the United Nations, NATO and other international institutions, rests on the ability of the global hegemon(s) (in this case the United States) ...read more.

This unequal relationship ensures that there is no harmony of interests between nations and backs up neo-realist notion that nations only work to pursue their own interests and increase their relative power. These similarities listed above are significant in that they show a degree of convergence between the two schools of thought. However this significance is limited in that it only shows two areas of common overlap amongst two vast ideologies. A primary difference between Neo-realism and Marxism is their different views on the structure of the world system. Neo-realism distinguishes itself from conventional Realism in that it believes that the structure of the international system is the key factor that determines the behaviour of states. Neo-realists believe that 'anarchy' is the ordering principle of the world structure, as well as the 'distribution of capabilities' (the number of major world powers). They believe that all policy decisions made by state actors are a result of the anarchic international system, whereby each nation acts to preserve their own survival. 'The Globalisation of World Politics' uses the example of China and Belgium to demonstrate the ways different nations act against the constraints of anarchy; "Belgium, with limited resources, responds to anarchy... ...read more.

Another key difference between the two ideologies relates to the nature of the state as the primary actor. Whereas neo-realists believe strongly in the state as the primary actor in IR, certain strands of Marxist teaching believe in breaking down the rigid notion of sovereignty. 6 Critical theorists, such as Andrew Linklater believe in a loose form of the word 'emancipation,' whereby citizens of the world no longer look to state boundaries as being significant in the context of their obligations. Such theorists look to enter an era of trans-nationalism, where people work alongside citizens of other nations, with lesser regard for state boundaries. Similar theories of the lessening of significance of the state actor emerge in the school of Critical Security Studies, which replaces the 'state' as the primary object of analysis for security problems, with individual human beings. In summary it can be concluded that the differences between Neo-realism and Marxism are more significant and fundamental than the similarities. Marxism differs from neo-realism mainly in the way that Marxists believe the nature of international relations are not permanent and vary depending on economic circumstances, whereas neo-realists believe that the patterns of international relations always remain the same. ...read more.