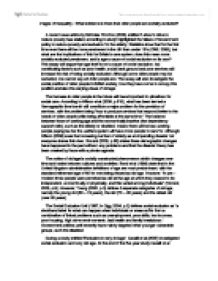 Images of inequality - What evidence is there that older people are socially excluded?

A recent news article by Nicholas Timmins (2008) entitled 'Labour's drive to reduce poverty has stalled, according to study' highlighted the failure of Government policy to reduce poverty and exclusion for the elderly. Statistics show that for the first time ever there will be more pensioners in the UK than under 16's (ONS, 2008), but what are the implications of this for Britain's care system, does this mean more socially excluded pensioners, and is age a cause of social exclusion on its own? This essay will argue that age itself is not a cause of social exclusion, but contributing factors such as poor health, social back ground and poor services will increase the risk of being socially excluded. Although some older people may be excluded, one cannot say all older people are. The essay will also investigate the social position of older people in British society, how they have come to occupy this position and also the varying views of old age. The increase in older people in the future will have important implications for social care. According to Wilson et al (2008, p.616), what has been termed a 'demographic time b**b' will constitute a major problem for the provision of services, with the problem ...read more.

Many of the problems the elderly face and which make people believe they are socially excluded can actually be accounted for by a low income and poverty. According to Beckford (2008) 200,000 more elderly people were classed as being poor in 2006-7 than in the year before. The New Policy Institute (2008) states older pensioners over the age of 75 are far more likely to live in a low income household. This is because the proportion of single pensioners' rises with age and the risks of low income for pensioner couples also rise with age. The cost of living in the UK has increased considerably in recent years but pensions compared to average adult earnings have decreased steadily since 1979 (Oppenheim & Harker, 1996, p.61). Government initiatives such as the Social Security Act 1986 which weakened the state earnings related pension scheme has weakened the finances of the elderly, usually hitting those hardest who are disadvantaged in other areas. As to deciding whether the elderly are socially excluded or not, it seems to be an extremely subjective decision. Different statistics use different criteria, and can be manipulated by those with ulterior motives, such as the government to save money or face, or Age Concern or Help the aged to gain funding. ...read more.

An interesting essay looking at evidence regarding social exclusion and older people. Relevant information regarding concepts of old age was presented alongside supporting evidence which makes the argument more credible. I would suggest that a definition of key terms used such as