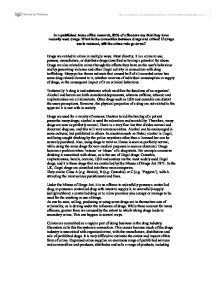 In a publicised home office research, 85% of offenders say that they have recently used drugs. What is the connection between drugs and crime? If drugs use is reduced, will the crime rate go down?

In a publicised home office research, 85% of offenders say that they have recently used drugs. What is the connection between drugs and crime? If drugs use is reduced, will the crime rate go down? Drugs are related to crime in multiple ways. Most directly, it is a crime to use, possess, manufacture, or distribute drugs classified as having a potential for abuse. Drugs are also related to crime through the effects they have on the user's behaviour and by generating violence and other illegal activity in connection with drug trafficking. Many police forces estimate that around half of all recorded crime has some drug related element to it, whether in terms of individual consumption or supply of drugs, or the consequent impact of it on criminal behaviour. Technically 'a drug is and substance which modifies the functions of an organism'. Alcohol and heroin are both considered depressants, whereas caffeine, tobacco and amphetamines are all stimulants. Other drugs such as LSD and cannabis can distort the users perceptions. However, the physical properties of a drug are not related to the approval it is met with in society. Drugs are used for a variety of reasons. Doctors to aid the healing of a patient prescribe many drugs; alcohol is used for relaxation and sociability. Therefore, many drugs are seen as perfectly normal. There is a very fine line that divides normal and abnormal drug use, and this will vary across societies. ...read more.

Based on victim perceptions, about 1.2 million violent crimes occurred each year in which victims were certain that the offender had been drinking. For about 1 in 4 of these violent victimizations involving alcohol use by the offender, victims believed the offender was also using drugs at the time of the offence. In the USA, an estimated 61,000 convicted jail inmates said they had committed their crime to obtain drugs. Of convicted property and drug offenders, about 1 in 4 had committed their crime to get money for drugs. A further connection between drugs and crime is outlined by Blumstein and before him, Paul Goldstein. It is a secondary, indirect form of crime committed by others who have no connection to the drug industry and are affected by the norms and behaviours in the drug industry influencing their behaviour. Blumstein calls this the community disorganization connection. Blumstein gives an example of this sort of connection: "...the influence of the widespread prevalence of guns among drug sellers may stimulate others in the community to similarly arm themselves for self-defence, to settle their own disputes that have nothing to do with drugs, or to gain respect." Blumstein points out that during the period from the mid-1980s to the early 1990s, the arrest rates for both drugs and homicide among black juveniles jumped. He suggests that the rise in juvenile drug arrests, especially in some inner-city neighbourhoods indicates a major recruitment of non-white juveniles into the crack cocaine market. ...read more.

1 Only some drugs are criminalized and studies of illegal drug use reveal that these are widely used in different settings from dance scenes, to cultures in which heroin can be seen as an alternative status symbol. The drugs market produces enormous profits for participants, from growers, producers and traffickers, to local, street level dealers. It also produces a large amount of secondary crime although the extent of this can be exaggerated. It has been argued that the decriminalisation of some drugs would help in the battle against drug-related crime, and Poland has taken steps towards this and has legalised all drugs, including heroin. 2 Some argue that dangerous drugs should be subject to the same licensing laws as tobacco and alcohol, as at least that way it would be easier to keep track of it. Cannabis, in particular, has a strong case for it being legalised. The side effects are less harmful than a normal cigarette or alcohol, and it has beneficial medical effects. A positive step in this direction is the fact that cannabis is being considered as a Class C drug, rather than a Class B. For some, this is the first step towards legalisation. Some also argue that more information on the taking of drugs should be available so that it can be made safer, but some see this as the tolerance of illegal drug use. The battle against drug-related crime will long and on going. It will take a lot of compromising on a lot of parts if a solution to this problem is to be reached. There is no short-term solution. 2 BBC1; Lunchtime News; 22-05-2001 ...read more.