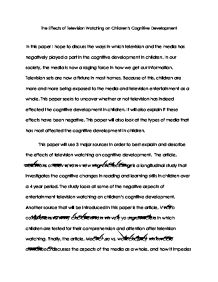 In this paper I hope to discuss the ways in which television and the media has negatively played a part in the cognitive development in children.

Just an additional hour spent on videogames as well as television watching in a week, could limit the amount of outdoor activities by 25 minutes (Hofferth, 2009). Also, just 1hr spent a week on the computer by itself, was enough to lessen sleep by 9 minutes. The displacement hypothesis explains easily why sleep is a particular target for loss of time, because it represents such a seemingly large amount of available time (Hofferth, 2009). Because of this, media takes a chunk out of sleep, which is essential in life. In conclusion, media, though can be beneficial in certain areas, can indeed be harmful to the cognitive development of children. Learning, reading, memory, sleep etc, are all detrimental to the growth and well-being of children. Media such as television watching, videogame playing and computer use to name a few have altered some of the processes necessary for children's cognitive growth. Children's learning and reading abilities can directly be altered by the displacement of reading by television watching. We have also learned that children at a certain age, though parents encourage them to watch, are not yet cognitively ready to comprehend the so-called educational, infant programs on television. It has been noted by the American that children learn much more from real life situations(Pempek, Kirkorian, Richards, Anderson, Lund, & Stevens,2010).The displacement hypothesis was even able to explain how children are missing out on essential sleep and play due to television, video games and computer usage. Studies such as these are essential to helping us understand the importance of declining the media usage by children. It is imperative to their overall growth and cognitive development. ...read more.