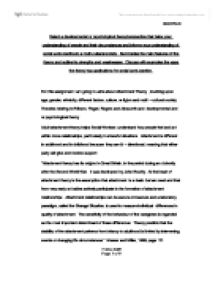 Select a developmental or psychological theory/perspective that helps your understanding of people and their circumstances and informs your understanding of social work practice in a multi-cultural society. Summarise the main features of the theory and outline its strengths and weaknesses. Discuss with examples the ways the theory has applications for social work practice. For this assignment I am going to write about Attachment Theory, touching upon age, gender, ethnicity, different factors, culture, religion and multi - cultural society. Theories relating to Erikson, Piaget, Rogers and Ainsworth and developmental and or psychological theory. Adult attachment theory helps Social Workers understand how people feel and act within close relationships, particularly in stressful situations. Attachment is different in adulthood and in childhood because they are bi - directional, meaning that either party will give and receive support. "Attachment theory has its origins in Great Britain, in the period during and shortly after the Second World War. It was developed by John Bowbly. At the heart of attachment theory is the assumption that attachment is a basic human need and that from very early on babies actively participate in the formation of attachment relationships. ...read more.

Although there isn't a particular name for this it is clearly talked about and discussed in the psychodynamic approach. Attachment is clearly influential in both professional and personal settings. As a Social Worker knowing about the attachment theory can help to make the right steps in order to protect the child and the family, Attachment has been defined as "an affectionate bond between two individuals that endures through space and time and serves to join them emotionally" Kennell 1976. Attachment helps the child: * Attain his or her full potential * Sort out what he or she perceives * Think logically * Develop a conscience * Become self reliant * Cope with stress and frustration * Handle fear and worry * Develop future relationships * Reduce jealousy Fahlberg, 1985, page 7. Personal growth is a psychological concept which has become increasingly popular since the development of Rogers Client Centred Therapy of 1940's. For personal growth to occur the self concept, self esteem and identities must already be established, but in turn, personal growth alters people's conceptions of their own selves. Every individual has their own conditions of worth, which could include, good manners - saying please and thank you. ...read more.

Object concept acquired. 2 - 6 years PRE - OPERATIONAL Beginning of thought and language but from an ego-centric perspective. 6 - 12 years CONCRETE OPERATIONAL Mental manipulation possible but tied to the concrete conservation achieved. 12 years + FORMAL OPERATIONAL Manipulation of abstract ideas, logical systematic thinking, reflective thought. "The diagram below depicts a typical, successful interaction between mother and child. The interaction is initiated by the child's need and consequent expression of displeasure and completed by the mothers' response. The Arousal Relaxation Cycle: NEED TRUST QUIESCENCE SECURITY DISPLEASURE ATTACHMENT SATISFACTION OF NEED Fahlberg, 1985, page 16. The Positive Interaction Cycle: Parent initiates positive interactions with the child SELF WORTH SELF ESTEEM Child responds positively Fahlberg, 1985, page 18. Erikson (1995) saw people developing their identity as they move through stages or 'crisis' points in their lives. Erikson saw individuals moving through the stages by virtue of increasing age, however, the successful progression through each stage, by the negotiation of the particular 'crisis' to a positive outcome, ensures healthy development. Erik Erikson had eight stages of development these were: 1. First year 2. Second and third years 3. Fourth and fifth years 4. Six to eleven 5. Adolescence 6. Young adulthood (20s and 30s) 7. Middle adulthood (40 to 60s) 8. ...read more.

This essay aimed to discuss theories of human behaviour and how they are useful in social work practice. It was useful to have the context for the essay in terms of using it to check that what is in the main body matches what was written in the introduction.
There is scope to improve the work. There was an example given of how attachment theory might work in real-life, but this was not related to the work of Piaget, Maslow or Erikson. In fact it was not clear why the writer included these theories as the information was simply presented and not linked to a case or social work practice.
There were a few grammar errors which could be minimised by careful proof-reading, otherwise the writing style was good overall.
Make sure the work finishes with a brief conclusion, bringing the key points of the essay together.
3/5