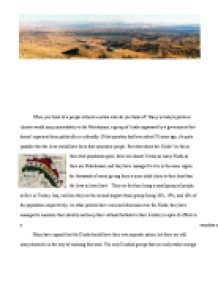 Integrated but not Assimilated - Many have argued that the Kurds should have their own separate nation, but there are still many obstacles in the way of realizing this wish.

﻿D The Three-Legged Milking Stool An Essay on the Kurds in Iraq and the Possibility of them Gaining Independence. By: Fred Bittner When you think of a people without a nation who do you think of? Many in today's political climate would jump immediately to the Palestinians, a group of Arabs oppressed by a government that doesn't represent them politically or culturally. If that question had been asked 70 years ago, it's quite possible that the Jews would have been that nationless people. But what about the Kurds? As far as their total population goes, there are almost 3 times as many Kurds as there are Palestinians, and they have managed to live in the same region for thousands of years, giving them a more solid claim to their land than the Jews in Israel have. They are far from being a small group of people, in fact, in Turkey, Iraq, and Iran they are the second largest ethnic group (being 20%, 19%, and 10% of the population respectively). As other powers have exercised dominion over the Kurds, they have managed to maintain their identity and keep their cultural foothold in their territory in spite of efforts to assimilate or destroy them. Many have argued that the Kurds should have their own separate nation, but there are still many obstacles in the way of realizing this wish. The only Kurdish groups that are really stable enough currently to create a viable independent nation are the ones in Iraq, where they have established a sense of stability and security that is greatly envied by Kurds in other places like Turkey. Iraqi Kurds play an important role in the new Iraqi government, providing a three-way balance with the Shiites and Sunnis. This balance could be compared to a three-legged milking stool, just enough balance to keep things steady, but with a very real chance of tipping over if one leg leaves. ...read more.

The Turkish Government decided not to allow the US to stage the invasion from their territory, so this idea had to be scrapped. Instead, the battle plan was changed so that the Peshmerga and the 10th SOG would be solely responsible for keeping the Iraqi Army units in the north engaged, so that they could not be repositioned south to help defend against the main invasion thrust. The Peshmergas showed themselves to be valiant fighters in this endeavor, and they won the respect and trust of the US military commanders. After the US invasion, the Kurdish region was the only region of the country that remained relatively untouched by the sectarian violence that engulfed the rest of the country. When the decision to implement a de-Baathification policy in Iraq was implemented, the Baath-party-controlled police and army dissolved and looting became widespread. The different sects and ethnic groups began fighting amongst themselves. At the same time, the remnants of Ansar al-Islam, led by Abu Musab al-Zarqawi, began a large scale insurgency against the American occupation forces. Hundreds of Iraqis and dozens of Americans were dying each month? but not in Kurdistan. In fact, according to the KRG website, not a single American soldier died in the Kurdish controlled regions of Iraq during the eight year occupation. Some sectarian groups tried to attack and provoke the Kurds into over-reacting and launching retribution attacks, hoping that this would destabilize the American efforts at nation building, but the Kurds remained largely aloof from the violence farther south. At this point it would seem to some that the Americans, now in control of the country, would have let the different groups in Iraq establish themselves as autonomous regions in a very loose federation, if not separate countries altogether. But the issue was not simply whether or not the Kurds, Shiites, or Sunni wanted independence. The political pressure from Iraq?s neighbors on the Americans to keep Iraq together as a nation was intense. ...read more.

This would be very unlikely. Civil war would almost certainly bring in Iraq?s neighbors, especially Iran, and Tehran is most likely to align itself with the Shia. That would tip the balance dramatically in their favor, and the Kurds would have a rough time resisting. The situation does not look particularly good for the Kurds in all honesty. Historically, Kurdish self-determination has greatly affected the politics of the region, and the issue will remain an important part of the geopolitical situation in the future. The very real possibility that the Kurds could feel like independence is the only option in the face of a Shiite-Sunni effort against them is a dangerous prospect. This would totally destabilize the Iraqi government, and a power grab would be likely to follow, where surrounding countries take what influence and control they can. This precarious three-legged milking stool is built on legs that are working against each other. For now, there is balance, but if one leg is removed, everything will come crashing down. ________________ 1. McDowall, David. A Modern History of the Kurds. I.B. Tauris, 2004. 2. Robinson, Linda (2004). Masters of Chaos: The Secret History of the Special Forces. Public Affairs. 3. Kurdistan: Iraq's Next Battleground? | Andrew Lee Butters / Arbil. Time Magazine, Thursday, Apr. 12, 2007 4. Iraq: A Unified Kurdish Army? | STRATFOR.com 5. Turkey: Keeping Iraq's Kurds in Check | STRATFOR.com 6. Iraq: The Ticking Time Bomb of Kirkuk | STRATFOR.com 7. The Progress of the Peshmerga Forces and their role in post-2003 Iraq | Kurdishaspect.com 8. Iraq: Kurdish Obstacles in the Path to Shiite Power | STRATFOR.com 9. Turkey: Keeping Iraq's Kurds in Check | STRATFOR.com 10. Iraq and the Kurds: Confronting Withdrawal Fears | International Crisis Group, March 27, 2011 11. Iraq: Kurdish Forces Withdraw From Kirkuk | STRATFOR.com 12. Iraq: Kurds, Foreigners and Oil | STRATFOR.com 13. Iraq: 1,500 U.S. Troops Will Remain After Deadline - Spokesman | STRATFOR.com 14. Kurds Overwhelmingly 'Vote' for Independence | www.MSNBC.com, 2005 15. Iraq: Kirkuk Referendum Likely to be Delayed | http://www.rferl.org/. Radio Rree Europe/Radio Liberty, 2007 ...read more.