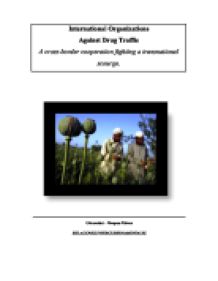 International cooperation against drugs. We will see at first what are the international organizations involved in anti-drug fight, then we will look at ways and policies used to pursue their actions and especially study the case of the FTAA. Finally, we

International Organizations Against Drug Traffic A cross-border cooperation fighting a transnational scourge. Universitat - Pompeu Fabras RELACIONES INTERGUBERNAMENTALES Problematic Consumed for millennia for medicinal or recreational purpose, it was during the twentieth century that drugs took the path of illegality. Until then, the phenomenon was not seen as a "problem" because it did not affect economy and politics as today and its consumption is now no longer only concerning a small number of marginalized groups. From the beginning of the century, the international community, under pressure of the United States, signed several treaties and protocols to address the drug problem then represented as a stream pervasive, complex and transnational. It is from the 1960s that the United Nations turned his efforts on establishing a legislative and administrative system to fight against the phenomenon: Single Convention on Narcotic Drugs in 1961, Convention on Psychotropic Substances in 1971, United Nations Convention against Illicit Traffic in Narcotic Drugs and Psychotropic Substances of 1988. The drug is considered as a real public problem that constitutes a serious threat to the health or life of users. Moreover, drug trafficking has become an international issue closely linked to other forms of criminal activity, affecting the economic underpinnings, cultural and political society. International politics of anti-drug leads an active and coherent battle to eradicate all forms of trafficking acting on both supply and demand side. Through international conventions, treaties and different resolutions from the United Nations Office on Drugs and Crime (UNODC), the parties agree to establish a coherent system of concrete measures to effectively fight against this scourge. One can legitimately wonder to what extent the policy adopted by the international community in the fight against drugs is effective? Given the institutional dimension of the problem and resources available to the international community, it is expected that common policy can be effective to reduce both supply and demand for drugs. ...read more.

Then producers, traffickers distributors, mafias, offshore banks and consumers will reduce or even stop their illicit activities, and then, civil society as a whole, consumers and victims of trafficking and crime are driven out of danger. The various policy actors are clearly defined (see Part I). To achieve its ambitions in the fight against drugs, public policy must provide the international community with the necessary tools for intervention, in turn prescriptive tools, incentives, informational or self-regulation depending on the angle of attack. Traffic control passes first through an action in the drug-producing countries, which are the source of the problem. The policy of limiting the supply of drugs is building a real planning system for the manufacture of drugs, limiting the production based on medical need for a system of prior authorization (Becker 2004), ensuring that the export of narcotics is not exceed the ratings of the countries of destination (Articles 23, 26, 27, 28 and 36 UN convention 1961). The agreements also establish a system of crop substitution and creation of local industries in order to overcome the action of pulling planes and destroying illegal refineries in close collaboration with development assistance agencies. The supply reduction also requires harmonization of laws and a reconciliation of the repressive practices worldwide. Interpol, as the World Customs Organization, standardizes its controls, collects, processes and disseminates information, participates to the training of States law enforcement agencies and facilitate procedures (procedures for extradition, police interventions in the waters international , monitored deliveries ...)(Articles 6, 7, 8, 9, 10 and 11 UN Convention 1988). But it is also to act against money laundering and the conversion of profits from the drug injected into the global economy. Specific services in this struggle were created as the Financial Action Task Force (FATF), which adopted fiscal measures to present the 4000 Offshore Banks in 60 tax havens (Becker 2004). These banks are then assigned to remove the banking secrecy, with the obligation to retain documents relating to customers, the vigilance and cooperation (FATF 1996). ...read more.

Attorney Benedict Dejemeppe has shown that European countries that have yet the same values ??of human rights, differ on the intervention of justice and continue to maintain an arsenal that reflects their very specific regulatory sovereignty (Dejemeppe 1998). States are not rational unitary actors: it exists among them a "multiplicity of government stakeholders" (Becker 2004), competing and more or less in permanent contact between them, which are more willing to defend their own interests and goals and their own definitions of priorities and procedures. In June 1998 the Special Session of the UN General Assembly on drugs launched a vast program of eradication of illicit crops, providing for their complete destruction by 2008. In April 2003, the CND has assessed the project mid-term while recognizing that the goal is not reached. It seems that the balance of power within the international community must change the views of the difficulties of the "war on drugs", "more harmful than drug abuse itself"(UN 1998), and a strategic shift was to take place for a deliberate policy of "harm reduction". Some countries, like Canada, may create a gap in favour of more tolerant universal policies, ranging from "risk reduction" to legalization, to decriminalize the use, that gap would grow as that the dominant political will be powerless and will have adverse effects more serious than the harm they claim to fight. But as globalization spreads, the proliferation of conflicts are still fuelled by drugs and the developments of synthetic drugs are increasing, it is unclear how the supply of drugs could decrease. Furthermore, with trade and financial market liberalization, and because tax havens continue to prosper, it is unclear how the drug money may stop to irrigate the economy. While health issues, economic, financial and policy are obvious, the amount spent on prevention, care, anti-money laundering, alternative crops and development of producing countries are derisory. Margaret Anstee, Under-Secretary General of the United Nations, responsible for coordinating the fight against drugs, believed that all programs against drugs in the world were worth "less than a bag of heroine". This gives an idea of ??the disproportion of the fight. ...read more.