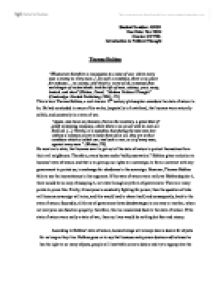 Student Number: 452091 Due Date: Nov 29/04 Course: GV1700- Introduction to Political Thought Thomas Hobbes "Whatsoever therefore is consequent to a time of war, where every man is enemy to every man; [..]in such a condition, there is no place for industry.....no society, and which is worst of all, continual fear, and danger of violent death. And the life of man, solitary, poor, nasty, brutish, and short"(Wotton, David, "Modern Political Thought" (Cambridge: Hackett Publishing 1996), 171) This is how Thomas Hobbes, a well-known 17th century philosopher considers the state of nature to be. He had concluded in many of his works, (especially in Leviathan), that humans were naturally selfish, and constantly in a state of war. "Again, men have no pleasure, (but on the contrary, a great deal of grief) in keeping company, where there is no power able to aver-aw them all. [...] Hereby, it is manifest, that during the time men live without a common power to keep them all in aw, they are in that condition which is called war, and such a war, as is of every man, against every man." (Wotton,170). He went on to state, that humans want to get out of the state of nature to protect themselves from their evil neighbours. Therefore, every human seeks "self-preservation." ...read more.

However, Thomas Hobbes does justify the presence of a monarchy. He states that since men are in a state of war, they have the desire to escape it, and the only way of doing that is by submitting their rights to a powerful government. "The final cause, end, or design of men...is the foresight of their own preservation, and of a more contented life thereby, that is to say of getting themselves out from that miserable condition of war...When there is no visible power to keep them in awe, and tie them by fear of punishment to the performance of their covenants..."(Wotton, 187) He states that by fear of government, the people will come to obey it. "The force of words, being...too weak to hold men to the performance of their covenants; there are in man's nature, but two imaginable helps to strengthen it. And those are either a fear of the consequence of breaking their word, or a glory, or pride in appearing not to need to break it." (Wotton, 190) Hobbes, however, fails to see that even this form of government is impossible to keep. His last quote implies that the government has nothing to fear, since they are in power. If they have nothing to fear, will they not act on their own selfish interests? ...read more.

complex, apparently unified and obviously legal acts as consenting to the establishment of a sovereign, transferring their authority into his hands and contracting to acknowledge the legitimacy of his laws?"(Hampton, 137) This is a question asked by many historians and political theorists who deny the justification of Hobbes' social contract. It cannot be put in any simpler words, if humans' state of nature, was really a state of war, as Hobbes depicts it, there would be no way to escape it; more importantly, under no form of government would we be able to escape it. People would be too selfish, too power-seeking to agree to live under a sovereign; instead, they would all be fighting for the sovereigns' position. Also, if any form of government does arise, it would fail almost immediately, because there would be nothing to stop the leader(s) from pursuing their own selfish interests, and hence, leading everyone back into the state of war. Reference List: Fukuda, Arihiro. "Leviathan and the English Republic" Sovereignty and the Sword: Harrington, Hobbes, and Mixed Governments in English Civil Wars Oxford: Clarendon Press. 1997 Hampton, Jean. Hobbes and the Social Contract Cambridge: Cambridge University Press. 1986 Leyden, W. Hobbes and Locke: The Politics of Freedom and Obligation London: The Macmillan Press. 1982 Watkins, John. Hobbes's System of Ideas Newcastle: Athenaeum Press. 1989 Wotton, David. Modern Political Thought Cambridge: Hackett Publishing Company, 1996 ...read more.