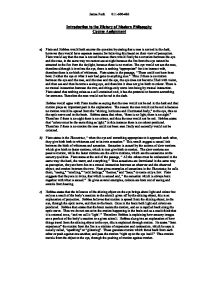 Introduction to the History of Modern Philosophy.

Introduction to the History of Modern Philosophy Course Assignment a) Plato and Hobbes would both answer the question by stating that a rose is not red in the dark, however they would have separate reasons for believing this based on their view of perception. Plato would say that the rose is not red because there would firstly be no motion between the eye and the rose, in the same way we cannot see at night because the fire from the eye cannot be attracted to the fire from the daylight, because there is no motion. The eye would not see the rose, therefore although it involves the eye, there is nothing "appropriate" for it to interact with, therefore there is no birth of whiteness. Plato states in the passage, " These could not have been born if either the eye or what it saw had gone to anything else." Thus if there is no motion between the eye and the rose, and the rose and the eye, the eye does not become filled with vision, and then see and then become a seeing eye, and therefore it does not give birth to colour. There is no mutual interaction between the two, and things only come into being by mutual interaction. Plato stated that nothing exists as a self-contained unit, it has the potential to become something for someone. ...read more.

Hobbes believes that motion is spread from the shining object, to the eye, through the optic nerve, and then to the brain. Once in the brain both light and colour are produced. Hobbes then states that the brain resists the motion, and so is repelled back along the optic nerve. Thus we do not conceive the motion happening in the brain and as a result think that it is external to us, "and we call it 'light'." Therefore Hobbes is explaining how sensory images are a product of the body's reaction to a given stimuli. Hobbes also gives an explanation of how things travel from the shining object to the eye, this is explained through motion. He states "from experience" the motion from the fire is a mixture of expansion and contraction, which he says is usually called, "sparkling" or "glittering". These generate motion which thrust back from each other or push against one another, and pass the motion "right up to the eye itself." Thus motion travels from the object to the eye, through the pushing of motion against motion. d) Hobbes explains that we see things as external to ourselves because once the motion has spread from the given object to the brain, the brain resists the motion and sends it back along the optic nerve, thus to the eye and back to the object. ...read more.

This uneven property has motion of there own which alters the 'pure' light and makes it 'confused' light, or colour. The main distinction is whether the 'pure' light is reflected from a polished or unpolished body. This is because theses bodies either contain internal motion which can alter the light or whether they have no motion and simply let the 'pure' light reflect off it and remain 'pure'. This demonstrates Hobbes' distinction between light and colour but there appear to be several problems with this distinction. The first is a relatively simple problem, Hobbes suggests that colour is produced from the reflection of pure light off unpolished bodies. Therefore a body such as a metal vase can either produce 'pure' light and 'confused' light, depending on whether the vase has been polished or not. But will the vase not still have colour even if it has been polished? The vase will have the potential to reflect 'pure' or 'confused' light but will appear to be always coloured, how is this possible according to Hobbes' theory. The second potential problem is that Hobbes does not take into account that the source of the 'pure' light can be coloured. If I were to look directly into the fire I would not see 'pure' light, it appears yellow and golden in colour, but this is not possible due to Hobbes' theory because it has not been reflected off any unpolished properties. There appear several problems with Hobbes' distinction between light and colour. James Peck 011-600-486 ...read more.