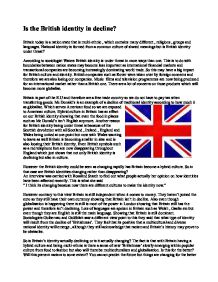 is british identity in decline?

Is the British identity in decline? Britain today is a nation state that is multi-ethnic , which contains many different , religions , groups and languages. National identity is formed from a common culture of shared meanings but is British identity under threat? According to sociologist Waters British identity is under threat in more ways than one. This is to do with boundaries between nation states may become less important as international financial markets and transactional companies are becoming increasingly dominating world trade. So this may have a big impact for British culture and identity. British companies such as Rover were taken over by foreign concerns and therefore we are also losing our companies. Music films and television programmes are now being produced for an international market rather than a British one. ...read more.

Another reason for British identity being under threat is because of the Scottish devolution with all Scotland , Ireland , England and Wales being united at one point but now with Wales wanting to leave as well Britain is becoming smaller in size and is also loosing their British identity. Even British symbols such as a red telephone box are now disappearing throughout England which just shows that not only British identity is declining but also in culture. However the British identity could be seen as changing rapidly has Britain become a hybrid culture. So in that case are British identities changing rather than disappearing? An interview was carried with Rosalind Starch to find out what people actually her opinion on how identities have been affected recently .This is what she said " I think its changing because now there are different cultures to make the identity now." ...read more.

Showing that Britain is still dominant. Sociologists Guibernau and Goldblatt saw a different view point to this they said that what type of identity will result from the decline of 'Britishness'. They feel that its positive that a multicultural and diverse national identity will emerge , although they still acknowledge that racism and Britain's history may prove to be obstacles. So is Britain's identity actually declining or is it actually changing? The fact is that with Britain having a hybrid culture and being multi-ethnic is there a sense of new 'Britishness' slowly emerging within popular culture from food to fashion but also will there be multiculturalism and globalisation. Is this for the better? Will this prevent racism to some extent? You cannot predict the future but things are changing for the better especially our British identity. ?? ?? ?? ?? ...read more.