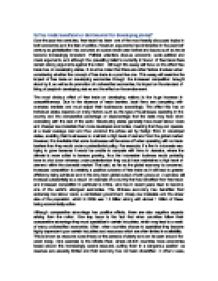 Is free trade beneficial or detrimental for developing states?

Is free trade beneficial or detrimental for developing states? Over the past two centuries, free trade has been one of the most heavily discussed topics in both economics and the field of politics. However, arguments have intensified in the past half century as globalisation has occurred at a pace never seen before and issues such as trade become increasingly important. Political scientists discuss economic, socio-political and moral arguments, and although the prevailing belief is currently in favour of free trade there remain strong arguments against the notion. Although this essay will focus on the effect free trade has on developing states, it must be noted that there are other factors involved when considering whether the concept of free trade is a positive one. This essay will examine the impact of free trade on developing economies through the increased competition brought about by it, as well as its promotion of undiversified economies, its impact on the standard of living of people in developing states and the effect on the environment. The most obvious effect of free trade on developing nations is the huge increase in competitiveness. Due to the absence of trade barriers, local firms are competing with overseas markets and must adjust their businesses accordingly. The effect this has on individual states depends on many factors such as the type of businesses operating in the country and the comparative advantage or disadvantage that the state may face when competing with the rest of the world. ...read more.

For example, in New Zealand fish are caught from local waters but are then sent to Japan and China for thawing and processing before being exported back to New Zealand for consumption. Although this may be economically justifiable, as far as the environment is concerned it is a waste of fossil fuels as well as unnecessary pollution. This is just one of several environmental concerns raised by the removal of trade barriers across the world; there is much research into the environmental impacts of free trade, especially in North America where it has become clear that the arrival of NAFTA has brought with it many environmental issues which must now be addressed. Secondly, there is the problem of low prices leading to poverty in sectors such as agriculture. The Director of the Trade, Equity and Development Program Sandra Polaski and others have found that as many developing economies are based upon the agricultural sector, higher food prices actually have positive overall poverty impacts whereas lower prices have significantly negative impacts on poverty. In her Carnegie Endowment report, "India's Trade Policy Choices" she finds that based on a 25% decrease in world rice prices: "seventy-eight percent of households would experience real income losses from such a price change, and the distributional impact would be regressive, with the poorest households losing the most."i Although the Carnegie Endowment report looks at the agricultural ...read more.

Although there are issues with completely free trade across the world with no form of regulation, there are ways in which these problems can be overcome so that the benefits of trade liberalisation heavily outweigh the risks and problems. For example, regulation can be introduced to ensure that huge amounts of FDI is not removed from a country over a very short space of time, and rules can be passed to ensure that the environmental externalities involved with international trade are dealt with in some way. For example, the externality can be internalised by adding shipping charges which can then be used to combat the environmental damage. If problems such as these are dealt with effectively, developing countries have a huge amount to gain from trade liberalisation as China has done in the past few decades. It is already clear that other developing states across the world are following in China and India's example, with Dornbusch (1992) finding that Mexico, Chile, Korea, Ghana and Botswana had all liberalised their markets by the early 1990s. i Polaski, S., A. Ganesh-Kumar, S. McDonald, M. Panda, S. Robinson, (2008) "India's Trade Policy Chaos", Carnegie Endowment Report, p.8 ii OECD (2002), "Foreign Direct Investment for Development", OECD, p.3 iii "FDI in Developing Countries and Economies in Transition: Opportunities, Dangers and New Challenges", Institute for International Economics, http://www.iie.com, p.15 iv "Special Report: Trade Between Developed and Developing Countries", World Hunger Organisation, http://WorldHunger.org/articles/global/Trade/trade. ...read more.