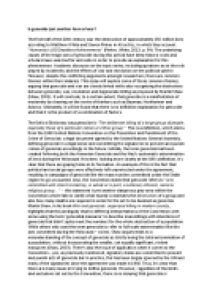 Is genocide just another form of war?

Transfer-Encoding: chunked ﻿Is genocide just another form of war? The first half of the 20th century saw the destruction of approximately 150 million lives according to Matthew White and Steven Pinker in Atrocities, in which they account ?Humanity?s 100 Deadliest Achievements? (Pinker, White, 2013, p. 34). The underlying causes of the tragic acts of genocide during this period have deep historic roots and scholars have searched far and wide in order to provide an explanation for this phenomenon. Academic discourse on the topic varies, including questions as to the role played by modernity and the effects of war and revolution on the political sphere. However, despite the conflicting arguments amongst researchers, there are common themes within their analyses. This essay will explore some of those common themes, arguing that genocide and war are closely linked while also recognising the distinctions between genocide, war, revolution and degenerate killing as proposed by Martin Shaw (Shaw, 2003). It will conclude, to a certain extent, that genocide is a manifestation of modernity by drawing on the works of thinkers such as Bauman, Horkheimer and Adorno. Ultimately, it will be found that there is no definitive explanation for genocide and that it is the product of a combination of factors. ...read more.

It must be stated however, that fascist and totalitarian dictators aren?t the only ones guilty of targeting unarmed civilians as part of the process of war, in fact during the second world war, the Allies routinely bombed areas inhabited by civilians, such as railways and industrial districts as a means of weakening the armed opposition. Markusen and Kopf argue in their book The Holocaust and Strategic Bombing: Genocide and Total War in the Twentieth Century, that strategic bombing such as that carried out by the Allies is genocidal in itself (Markusen, Kopf, 1995). Shaw expands this argument further with his proposition of the concept of ?degenerate war?, which he describes as the ?annihilation of civilian populations for strategic reasons.? (Shaw, 2003). Although this form of warfare is also responsible for the massacre of civilians, the UN Convention fails to recognise this in the same breadth as genocide, which is arguably justifiable when looking more closely into some of the core dimensions of degenerate war in contrast to genocide and regular warfare. Shaw explains that, as a type of social action, there is a clear distinction between war and genocide in that war is about the destruction of an organised army or enemy whereas the destruction in an episode of genocide is aimed towards an unarmed social group. ...read more.

This new dynamic between revolution and genocide doesn?t explain all episodes of violent mass killings against targeted social groups and of course, not all revolutions are genocidal. However, taking into consideration some of the most notorious, widespread acts of genocide in history like those committed in Nazi Germany and the Soviet Union, there?s no denying the pattern that appears to emerge in the 20th century of revolutionary movements characterised by genocide and ethnic cleansing, conducted against the backdrop of war or within militarised societies. Thus, it remains that the roots of genocide are complex to say the least. The twentieth century was a major turning point in the history of violence and armed conflict in society, which was reflected in both the increased number of genocidal episodes and inter-state and civil wars. It would appear that there are strong correlations between genocide and war, with evidence suggesting that although war does not necessarily cause genocide, it is fundamental to it?s nature. Various features of modernity such as enhanced technologies and changes to bureaucracy allowed states to systematically exterminate the undesirable groups within their populations, with certain ideas around nation and race born out of the Enlightenment also having played a part in this. As well as a form of war, genocide also acts as a key component in many of the revolutions, which emerged out of WWI, revolutions grounded in the creation of a new, homogenised society. ...read more.