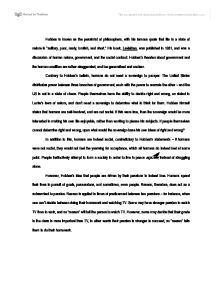 Is Hobbes the pessimist of philosophers?

Hobbes is known as the pessimist of philosophers, with his famous quote that life in a state of nature is "solitary, poor, nasty, brutish, and short." His book, Leviathan, was published in 1651, and was a discussion of human nature, government, and the social contract. Hobbes's theories about government and the human condition are rather exaggerated, and too generalized and unclear. Contrary to Hobbes's beliefs, humans do not need a sovereign to prosper. ...read more.

Hobbes himself states that humans are self-involved, and are not social. If this were true, then the sovereign would be more interested in making his own life enjoyable, rather than working to please his subjects. If people themselves cannot determine right and wrong, upon what would the sovereign base his own ideas of right and wrong? In addition to this, humans are indeed social, contradictory to Hobbes's statements - if humans were not social, they would not feel the yearning for acceptance, which all humans do indeed feel at some point. ...read more.

Some may have stronger passion to watch TV than to work, and so "reason" will tell the person to watch TV. However, some may decide that their grade in the class is more important than TV, in other words their passion is stronger to succeed, so "reason" tells them to do their homework. Though Hobbes does correctly view that which drives of human beings, his view of government is greatly skewed, in that one person should not have absolute power to decide the fate of a society. ...read more.