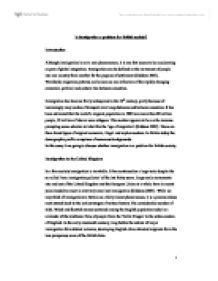 Is immigration a problem for British society?

Is immigration a problem for British society? Introduction Although immigration is not a new phenomenon, it is one that seems to be accelerating as part of global integration. Immigration can be defined as the movement of people into one country from another for the purpose of settlement (Giddens 2001). Worldwide migration patterns can be seen as one reflection of the rapidly changing economic, political and cultural ties between countries. Immigration has become fairly widespread in the 20th century, partly because of increasingly easy modes of transport over long distances and between countries. It has been estimated that the world's migrant population in 1990 was more than 80 million people, 20 million of whom were refugees. This number appears to be on the increase prompting some scholars to label this the 'age of migration' (Giddens 2001). There are three broad types of migrant economic, illegal and asylum seekers. In Britain today the demographic profile comprises of numerous backgrounds. In this essay I am going to discuss whether immigration is a problem for British society. Immigration to the United Kingdom In a free society immigration is inevitable. It has continued on a large scale despite the so-called 'zero immigration policies' of the last thirty years. ...read more.

Thus migrants settled in large numbers in Greater London. From an early stage in history two features have dominated the situation of new immigrant arrivals. The first is that generally immigrants have found themselves occupying the least desirable jobs. The second is that, despite the economic advantages to Britain of being able to call on supplies of migrant labour, a variety of social strains have also emerged. A key strain has been concerning housing. Successive governments have failed to satisfy fully the demand for housing. The arrival of large numbers of immigrants particularly in inner city areas, with the most acute housing problems, inevitably has exacerbated already serious shortages. It could be argued that there are two boundaries placed on immigrants to the UK: first, through restrictions by immigration controls and second through processes of discrimination in the current housing and education system. A possible response to resolve these problems would be the pursuit of a more pro-active housing policy aimed at achieving greater integration. Immigration control is one area of policy where Britain seems to wish to maintain independent policies from the rest of the European Union, effectively double-locking the door on immigrants (Mohan 1999). In accordance with the Treaty of Rome 1997, EU nationals can enter the UK freely to take or look for work; this is in stark opposition to asylum seekers, who must prove that their motivation is not economic. ...read more.

In my view any future immigration policy aimed at meeting labour shortages must be formulated in the wider context of employment policy. One way in, which a managed policy could be initiated, is through a quota entry system although; this is likely to be extremely controversial. The United Nation's Population Division reports recently suggested that low birth rates mean the UK will need to import 1.6 million migrants a year simply to keep its working-age population stable between now and 2050. Increased immigration will have an effect on the culture of the UK. Although this maybe perceived as a negative effect, I am under the view that the UK is enormously enriched and strengthened by social and cultural diversity. While it could be argued that the Government attempt to reduce the "push factors", it should be noted that many immigrants from third world countries ultimately become emigrants, either returning to their country of origin or going elsewhere. Reference list Budge, I., Crewe, I., McKay, D and Newton, K (2001) The New British Politics Longman, Harlow Giddens, A (2001) Sociology (4th edition), Polity Press, Cambridge Mason, D (2000) Race and Ethnicity in Modern Britain (2nd edition), Oxford University Press, Oxford Mohan, J (1999) A United Kingdom? Economic, Social and Political Geographies, Arnold, London ?? ?? ?? ?? 1 ...read more.