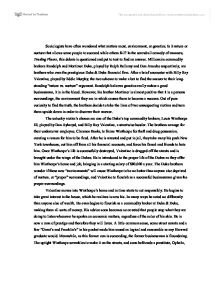 Is it nature or nurture that allows some people to succeed while others fail? In the screwball comedy of manners, Trading Places, this debate is questioned and put to test to find an answer.

Sociologists have often wondered what matters most, environment, or genetics. Is it nature or nurture that allows some people to succeed while others fail? In the screwball comedy of manners, Trading Places, this debate is questioned and put to test to find an answer. Millionaire commodity brokers Randolph and Mortimer Duke, played by Ralph Bellamy and Don Ameche respectively, are brothers who own the prestigious Duke & Duke financial firm. After a brief encounter with Billy Ray Valentine, played by Eddie Murphy, the two scheme to make a bet to find the answer to their long-standing "nature vs. nurture" argument. Randolph believes genetics really makes a good businessman, it is in the blood. However, his brother Mortimer is almost positive that it is a persons surroundings, the environment they are in which causes them to become a success. Out of pure curiosity to find the truth, the brothers decide to take the lives of two unsuspecting victims and turn them upside down in order to discover their answer. The unlucky victim's chosen are one of the Duke's top commodity brokers, Louis Winthorpe III, played by Dan Aykroyd, and Billy Ray Valentine, a streetwise hustler. The brothers arrange for their undercover employee, Clarence Beeks, to frame Winthorpe for theft and drug possession, creating a reason for him to be fired. After he is arrested and put in jail, they take away his posh New York townhouse, cut him off from all his financial accounts, and force his fianc� and friends to hate him. Once Winthorpe's life is successfully destroyed, Valentine is dragged off the streets and is brought under the wings of the Dukes. He is introduced to the proper life of the Dukes as they offer him Winthorpe's home and job, bringing in a starting salary of $80,000 a year. The Duke brothers wonder if these new "environments" will cause Winthorpe to be no better than anyone else deprived of nurture, or "proper" surroundings, and Valentine to flourish as a successful businessman given the proper surroundings. ...read more.

In the very beginning of the movie, there is the scene where Valentine is passing by as Winthorpe is exiting Duke & Duke, a male-dominated organization, as Feminists would most likely point out. As he descends onto the sidewalk, the two men collide and Winthorpe drops his briefcase on the sidewalk. Valentine picks up the briefcase and attempts to give it back to the snooty commodity broker, who in turn interprets the situation differently. He makes an assuming judgement, based solely on Valentine's looks, that he is trying to steal the briefcase. He shouts out at Valentine to just take it and spare his life. Two policemen are close by and overhear the two men and because of Winthorpe's prominent position in society, they automatically believe his accusations and begin chasing Valentine until they catch and arrest him. Conflict theorists would not overlook this situation either. The continual struggle between the poor and rich helps to better understand social behavior. It proves how social order is maintained through the power of the wealthy, as they have control over the inferior poor in society. Symbolic interactionists state that the prime determinant of human action includes one's interpretations and definitions of a situation. We engage in social interaction and self-reflection continually, which leads to constant changes in our interpretations of our situations and ourselves, understandings which correspond only indirectly, at best, with "real world" changes. Interaction is not only what happens between people, but also within the person. We are actors who have a self which we constantly talk to. This self has developed as a combination from all the people we have cared about and all the roles we have played. This self is what makes us human, and distinguishes us from animals and everything else. Mead's leading student, Herbert Blumer, wrote that, with the mechanism of self-interaction the human being ceases to be a responding organism whose behavior is a product of what plays upon him from the outside, the inside, or both. ...read more.

However, I suppose he could have presented the fact that genetics can give a person certain characteristics, such as being extremely motivated and goal driven, hard working, strong willed, intelligent, or being a perfectionist. Such characteristics are things which are bestowed through genetics. Coming from a family who has a strong work ethic and is naturally intelligent can benefit an individual and help them along their way to success. Possessing characteristics such as those will motivate a person to want to continue their education. Take for example, deciding to attend college. A college is a surrounding in which individuals gain more knowledge to help them be successful in life. Individuals are not born with complete knowledge of everything. Certain things have to be taught, and taught in certain surroundings, the correct environment. I suppose then, heredity and environment go hand in hand. A combination of the two is essential in determining the outcome of one's success. First, one must have that drive to excel. To excel, one must be placed in the proper environment in which that is possible. It is evident that the initial drive is the genetic or heredity factor, the nature aspect of the theory. The appropriate surrounding then is the environment, or the nurture aspect of the theory. One can not possibly survive without the other. In believing this, I would have ended the film with both Randolph and Mortimer winning the bet, for if Valentine had not had the ardency inside, he would not have put forth effort in becoming an accomplished commodity broker. Even Winthorpe's situation combines heredity and environment. Had he not strived to make his life better again, he would never have moved in with Ophelia or sold his valuables at the p**n shop in the attempt to get his life back on the right track. He naturally had it in him to work hard and use his intelligence to get what he wanted, and in the end, he got it. In fact, he may have even surmounted his original goal by a long shot. ...read more.