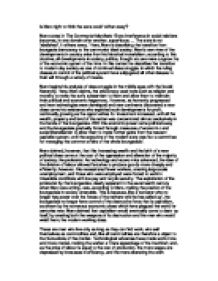 Is Marx Right to Think the State Could Wither Away?

Is Marx right to think the state could 'wither away'? Marx states in The Communist Manifesto 'State interference in social relations becomes, in one domain after another, superfluous... The state is not 'abolished'. It withers away.' Here, Marx is describing the transition from bourgeois democracy to the communist ideal society. Marx's own view of the developments in society arise from his historical materialism; according to this doctrine, all developments in society, politics, thought etc are mere outgrowths of the economic system of the time. In this context he describes the transition to modern day society as one of continual class struggle, in which the ruling classes in control of the political system have subjugated all other classes to their will through a variety of means. Marx begins his analysis of class struggle in the middle ages with the feudal hierarchy. Here, Marx claims, the aristocracy used tools such as religion and morality to make the surfs subservient to them and allow them to maintain their political and economic hegemony. However, as humanity progressed and new technologies were developed and new continents discovered a new class came into existence who exploited such developments for profit, continually growing as the opportunities for investment increased, until all the wealth, property and land of the nation was concentrated almost exclusively in the hands of the bourgeoisie. With this economic power came political sway and the bourgeoisie gradually forced through measures of economic and social liberalisation to allow them to make further gains from the nascent capitalist system, until the executive of the modern state was 'but a committee for managing the common affairs of the whole bourgeoisie'. ...read more.

Because Marx sees the definition of the state as the domination of one class over another, once class distinctions have been completely erased, he believed the state will simply 'wither away'. It will no longer be necessary as a means of political power, because all will be united under the same goal; the people who would previously have been politicians would be controlling production and distribution to ensure maximum efficiency, and progress would be achieved even faster than under capitalism as academics and scientists work to create new ways of achieving happiness and prosperity for all of society. In this sense, the communist revolution would be different from every other past revolution; it would not be the passing of power from one faction to another, but the complete removal of class and class interests and thus, of the political hegemony of any single portion of society. However, many writers criticised this idea of Marx's, especially his anarcho-communist contemporaries, notably Bakunin. Bakunin's claimed that 'if there is a state, then there is unavoidably domination, and consequently slavery'. As an anarchist he believed in a communism without the Marxist 'dictatorship of the proletariat', simply the removal of the state with all its institutions, and the establishment of autonomous communities based on communist principles. His main argument against Marx was that if the proletariat, or a selection of them, were given complete power over the running of the state, they themselves would become the new ruling class, and subject the rest of the nation to new oppression. ...read more.

there may no longer exist a bourgeoisie in opposition to the proletariat, but there will be a state in opposition to the people. This is apparent from historical experience; wherever there has been a communist revolution and a consequent communist state, whether it is in China, Russia or Cuba there has been a vast amount of bloodshed from the outset, followed by years of brutal oppression and continual encroachment of human rights. It is true that Marx does not believe in human rights, and could attempt to ascribe such oppression to the continuing battle against the bourgeoisie, but the majority of those killed in Russia were the peasantry and they were killed in order to secure the power of the state over the people. Overall therefore, it is easy to see now from an historical perspective, what Bakunin realised when he was writing, that the state will not wither away. Instead, it will continually expand, generally under the leadership of a brutal dictator, until it effectively becomes its own oppressive class with its own interests, and those interests, unless they are made accountable to the people, will be directly opposed to those of the people. Overall, therefore, it is clear that Marx was wrong to believe the state could wither away. This is because the workers' state will become a class in itself with vested interests and its own forms of oppression. This was identified by Marx's anarchist contemporaries and proven true by historical experience; human nature makes the Marxist view of the state untenable. ...read more.