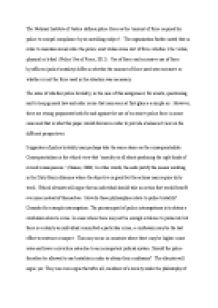 Is Police Brutality Ever Justified?

﻿The National Institute of Justice defines police force as the ?amount of force required by police to compel compliance by an unwilling subject?. The organisation further noted that in order to maintain social order the police must utilise some sort of force whether it be verbal, physical or lethal. (Police Use of Force, 2012). Use of force and excessive use of force by officers (police brutality) differ in whether the amount of force used was excessive or whether or not the force used in the situation was necessary. The issue of whether police brutality, in the case of this assignment, for arrests, questioning and to keep general law and order is one that may seem at first glance a simple no. However, there are strong proponents both for and against the use of excessive police force in some cases and that is what this paper would discuss in order to provide a balanced view on the different perspectives. Supporters of police brutality may perhaps take the same stance as the consequentialists. ...read more.

Not only do these actions reinforce societal ideals but it may also act as a deterrent to other criminals. If potential criminals know that the police will carry out their duties to uphold the law no matter what then they may be less inclined to commit a crime, thereby resulting in a reduced prison population and an ease on tax payers. Others may also argue that the criminal is not thinking about the officer?s safety or the officer?s rights therefore why should the police worry about theirs? They may stress the point that the police are not dealing with general law-abiding members of the public but those who wilfully, according to Beccaria?s philosophy, broke the law. As valid as these points may be, the counter-argument fraction is extremely vocal in their disapproval of these sorts of tactics used by officers. One point of their argument is that while it may be true that police should use force in carrying out their duties it is not in the police?s jurisdiction to execute punishment. ...read more.

Police are supposed to upkeep the law therefore citizens should be able to trust their officers. How can the public trust their officers if they, the officers, are willing to compromise the rights of the people in order to maintain order? The question of whether or not police brutality should be used in areas such as arrest, questioning and maintenance of law and order is not necessarily easy to answer. This is so due to the subjectivity of what may constitute as brutality in one area of the world may not be seen as such in another part and vice versa and also the social climate in various areas may differ as well. While human rights ought to be maintained it is also true that society itself should be kept safe. Perhaps if the other branches of the judicial systems were to function well then the perceived need to use brutality by policemen would not be there. In conclusion, only in a harmoniously functioning world, where everyone agrees as to what constitutes brutality and when the other arms of the system function well in a general climate of peace, then one can say definitely that there are no circumstances where police brutality should considered. ...read more.