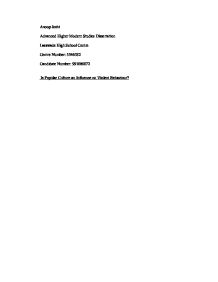 Is Popular Culture an Influence on Violent Behaviour?

The most plausible interpretation of this pattern of correlations is that early preference for violent television programming and other media is one factor in the production of aggressive and antisocial behaviour when the young boy becomes a man. This evidence reflects a study showing the link between popular culture and violent behaviour a real one. Consequently, a follow-up study was made in 1994, of Lefkowitz's study. 22 years later, when the boys were thirty years old. The study found that there were significant correlations between violence viewing at age eight and serious interpersonal criminal behaviour at age 30. By looking at the effects of television, film and music on individuals and the way in which people can be affected by its controlling powers it is possible to draw a picture of defiance and dissidence. Research by Bandura, Merrell and Lefkowitz has shown the possibilities and the reality of a correlation between popular culture and violent behaviour. Despite successful research into the field of violent behaviour and popular culture and success in court and interesting theories, many people believe that popular culture cannot and does not influence violent behaviour in individuals in contemporary society, this is discussed in the following chapter. Chapter 2 - Popular culture Does Not Influence Violent Behaviour "The life and behaviour of an individual, is shaped by a variety of factors from the cradle to the grave".14 Many critics of the theory that popular culture has a big influence on violent behaviour identify with the idea that individuals are influenced in many ways, and popular culture can only have limited influence if any. Many agreed with Jim Carroll, writer of the controversial Basketball Diaries, one of the alleged influences for the Columbine Killings in 1999 when he said: 'Artists have nothing to do with the deranged, vaguely connected actions of a few celebrated nut cases - and that's it.' 15 There is substantial evidence which backs up Carroll's case. ...read more.

This however, does not gratify a link between violence and popular culture in that popular culture does not have a direct control over an individual, Reverend J. Williamson of Littleton Colorado, when talking about the murders in Columbine said: '...And through the soul, although they shape our behaviour, the roots of violence are much more complicated than just bad rock lyrics or brutal screenplays. Violence lives amongst us, in our homes and on our streets and it is these aspects of life we need to help eradicate before we can stop a repeat of this [ Columbine ] happening.'21 1 Robert Murphy. Culture and Social Anthropology: An Overture. 2nd ed. Englewood Cliffs, NJ: Prentice Hall, 1986 2 "One of the greatest figures in the field of religious studies": http://hektor.umcs.lublin.pl/~zlimn/wfis/uk/program/konspekty4-5k.htm 3 Robert Murphy. Culture and Social Anthropology: An Overture. 2nd ed. Englewood Cliffs, NJ: Prentice Hall, 1986 4 Oxford Dictionary of Sociology - Gordon Marshall - Oxford university Press published in 1998 5 http://www.wave.org/database.html 6 Albert Bandura (1986) - Criminology by Stephen Jones Published by Reed Elsevier (UK) Ltd. 1998 7 http://www.ksu.edu 8 Stereotypical athletic students involved in mainstream sports e.g. Basketball/American football 9 Masculinities, Violence and Culture - Suzanne E. Hatty, 2000 Sage Publications 10 engaging with the movie as if it is reality out with the cinema hall 11 http://www.ariannaonline.com 12 See appendix B for full song lyrics and background information 13 http://news.bbc.co.uk/1/hi/entertainment/music/1271224.stm 14 Delinquency and Drift - page 74 15 Jim Carroll - Writer, The Basketball Diaries in an interview for CNN. 16 Tom Dewe Matthews The Guardian April 4th 1998 in article titled: Ban it? But we never ban any films in Britain 17 http://www.bbfc.co.uk 18 Genesis 4:8 - 'Later Cain suggested to his brother, Abel, ''Let's go out into the fields.'' And while they were there, Cain attacked and killed his brother.' Taken from New Living Translation (c) Tyndale 1997 19 http://www.wave.org 20 Sociology by Anthony Giddens (c) 1997 Polity Press Ltd. 21 http://www.littleton-memorial.com/reverendwilliamson/columbine.html 1 ...read more.