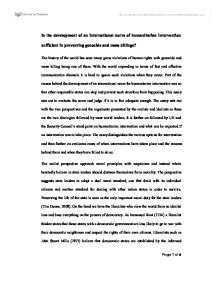 Is the development of an international norm of humanitarian intervention sufficient in preventing genocide and mass killings?

Is the development of an international norm of humanitarian intervention sufficient in preventing genocide and mass killings? The history of the world has seen many gross violations of human rights with genocide and mass killing being one of them. With the world expanding in terms of fast and effective communication channels it is hard to ignore such violations when they occur. Part of the reason behind the development of an international norm for humanitarian intervention was so that other responsible states can stop and prevent such atrocities from happening. This essay sets out to evaluate the norm and judge if it is in fact adequate enough. The essay sets out with the two perspectives and the arguments presented by the realists and idealists as these are the two ideologies followed by most world leaders. It is further on followed by UN and the Security Council's stand point on humanitarian intervention and what can be expected if an intervention was to take place. The essay distinguishes the various options for intervention and then further on evaluates cases of when interventions have taken place and the reasons behind them and when they have failed to do so. The realist perspective approach moral principles with scepticism and instead whole heartedly believe in state leaders should distance themselves from morality. The perspective suggests state leaders to adopt a dual moral standard, one that deals with its individual citizens and another standard for dealing with other nation states in order to survive. ...read more.

As seen through out history this action has failed to take place. Furthermore, under the UN charter possible interventions have to be called out or have the issue raised by the Council or Secretary General. This proves to be in-adequate as the suffering states are left at the mercy of the UN in deciding if at first the issue is even worth raising and if it is, then discussing if any and what type of action is to be taken. This process can be agonising long for the citizens of those states who are in dire need of a humanitarian intervention (Alex J. Bellamy, 2008). In order to be able to build up a fair judgement of the current norm and to understand the UN's role in humanitarian intervention, it is important to recognise the boundaries the organisation is confined within. It is not to say that humanitarian interventions have not taken place or in some case not been successful because that would be an un-fair statement. They have taken place and done a fair amount of good as well, but they have mostly been in the form of a military intervention. There are many other ways of preventing crimes against humanity in particular genocide and mass murder, but the most used response is that of a military intervention, which really should be used as a last resort and not the first choice. ...read more.

These decisions to intervene were based on the nation states that did intervene gaining something in return. It is simply the abuse by the powerful in order to justify interference in the affairs of the weak nations (Alex J. Bellamy, 2008). It is this selectivity of the response that makes the international norm even the more in-adequate in responding to intervention needs. The current norm of humanitarian intervention is not sufficient, as seen in the past again and again mass killings keep on going and nations not intervening unless it is in their interest. The realist and liberalist perspective look at the whole issue of intervention from two very different lights but both respond against intervening. The realists see it as against the states interest and the moral duty towards the state comes above anything else. The liberalists believe in the power of democracy and the states in need of help of intervening should sort it out themselves by overthrowing tyrant governments and establishing democracy. The UN and Security Council are there but they are limited to the boundaries set forth in the charter. With regards to further research, the responsibility to protect report provided some good suggestions and maybe creating a separate body that looks into issues of intervention can be formed, but then forms the problem of discrediting the UN and its sovereignty. The current norm of intervention is week but it can be made stronger by developing various other ways of intervention and limiting military intervention as an absolute last resort. ...read more.