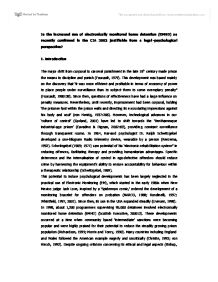 Is the increased use of electronically monitored home detention (EMHD) as recently confirmed in the CJA 2003 justifiable from a legal-psychological perspective? EMHD is said to be more humane, rehabilitative and especially less costly, than impriso

Is the increased use of electronically monitored home detention (EMHD) as recently confirmed in the CJA 2003 justifiable from a legal-psychological perspective? I. Introduction The major shift from corporal to carceral punishment in the late 18th century made prison the means to discipline and punish (Foucault, 1979). This development was based mainly on the discovery that 'it was more efficient and profitable in terms of economy of power to place people under surveillance than to subject them to some exemplary penalty" (Foucault, 1980:38). Since then, questions of effectiveness have had a large influence on penalty measures. Nevertheless, until recently, imprisonment had been corporal, holding 'the prisoner fast within the prison walls and directing its excruciating impressions against his body and soul' (von Hentig, 1937:206). However, technological advances in our 'culture of control' (Garland, 2001) have led to shift towards the 'Benthamesque industrial-age prison' (Cavadino & Dignan, 2002:69), providing constant surveillance through transparent rooms. In 1964, Harvard psychologist Dr. Ralph Schwitzgebel developed a one-kilogram Radio telemetry device, wearable by a person (Renzema, 1992). Schwitzgebel (1969; 1971) saw potential of his 'electronic rehabilitation system" in reducing offences, facilitating therapy and providing humanitarian advantages. Specific deterrence and the internalisation of control in ego-defective offenders should reduce crime by harnessing the equipment's ability to ensure accountability for behaviour within a therapeutic relationship (Schwitzgebel, 1969). This potential to induce psychological developments has been largely neglected in the practical use of Electronic Monitoring (EM), which started in the early 1980s when New Mexico judge Jack Love, inspired by a 'Spiderman comic,' ordered the development of a monitoring bracelet for offenders on probation (NARCO, 1988; Rondinelli, 1997; Whistfield, 1997, 2001). Since then, its use in the USA expanded steadily (Liverani, 1998). In 1998, about 1,200 programmes supervising 95.000 detainees involved electronically monitored home detention (EMHD) (Scottish Executive, 2000:3). These developments occurred at a time when community based 'intermediate' sanctions were becoming popular and were highly praised for their potential to reduce the steadily growing prison population (Richardson, 1999; Morris and Tonry, 1990). ...read more.

Concerning juveniles being monitored, parents welcomed knowing 'where their errant offspring were at night", but felt a 'crushing burden of responsibility.' (Smith, 2001:207). VI. Results of EMHD-programmes Completion rates as high as 72-95% have been reported for EMHD-programmes in England and Wales (Mair & Mortimer, 1996; Mortimer et al., 1999; Mortimer, 2001; Smith, 2001; Walter, 2002; Dodgson et al., 2001) and were highest with HDC. However, Dodgson et al. (2001) only counted those being returned to prison as non-completions, whilst not all violations were counted as breaches, so these did not lead automatically to revocations of the HDC- licence. From those on EMCO returned to court for a breach action, 24% continued their curfew with an additional fine. 33% received no action and 23% of those whose orders were revoked got a further curfew order (Walter, 2002). Successful completion depended on the offence, offender type and fear of custody (Mortimer et al., 1999; Dodgson et al., 2001; Walter, 2002). 97% of Crown Court orders, but only 68% of Youth Court orders were completed (Mortimer et al., 1999). Typical curfewees were young males with a long history of offending (Sugg et al., 2001). The most common offences were theft and handling (23%), driving whilst disqualified (15%) and burglary (10%) (Walter, 2002). However, theft and handling had the lowest completion rates at 79%, whilst the most successful were public order offences (92%), drug offences (92%), driving whilst unfit (91%) and violent offences (90%) (Walter, 2002). These results, confirmed by Scottish experiences (Smith 2001), are linked with EMHD's restrictive incapacitation effect which interrupts the patterns of offending (Dodgson et al., 1999). Though, as far as HDC is concerned, the highest breach rate was for offenders convicted for burglary (10%) and the lowest (2%) was for fraud or forgery convicts (Dodgson et al., 2001). How the 'toughening of the clientele', implemented by the inclusion of long-term sentences in the HDC-scheme, will affect completion rates is unclear. ...read more.