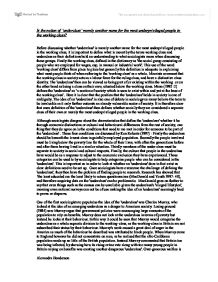 Is the notion of underclass merely another name for the most underprivileged people in the working class?

Another sociologist who has looked at the idea of the underclass not by examining their behaviour, and instead looks at their economic situation is Anthony Giddens. Giddens discusses how in a modern capitalist society a situation of a dual labour market exists. Jobs in the primary labour market are stable; people in these professions are middle or upper class and can enjoy career mobility. Jobs in the secondary labour market have poor job security and low chances of advancing beyond a persons original position (Haralambos and Holborn 2004: 60). Giddens comments that employers need to be able to plan ahead in a capitalist society and as a result of this need people from the primary sector who they can count on to follow through with their plans. This though can be expensive as they must offer high payment to keep these people. Employers though can then reduce costs by giving workers in much lower positions less money and job security, as they can be more easily replaced. In this way the underclass are seen as being helpless to their situation and their skills offer them little opportunity for career advancement and therefore social mobility. From this angle Giddens offers a more sympathetic approach to the 'underclass' as he suggest unemployment is inevitable in the current job climate. Another sociologist who more recently has looked at the underclass but specificity young people and unemployment is Ken Roberts in his study 'Is there an emerging British Underclass'? ...read more.

The term 'underclass' on the other hand has a great deal of stigma attached to it, the word 'under' suggesting a class of people below that of the rest of the population. What separates the working class from the 'underclass' is the 'derogatory connotations' (MacDonald and Youth 1997: 52) that accompany the idea of the working class. As Roberts (1997) states 'members of the alleged underclass are far more vulnerable, and if the term enters social usage it is likely to contribute to their social exclusion'. The idea of social exclusion is here key as the working class like the middle class both take on important roles in society, where as the 'underclass' are seen as having nothing to contribute. One of the conditions of being part of the 'underclass' was to be different in social and cultural respects in this way unlike the working class the 'underclass' are separated from the rest of society. Dean and Taylor Gooby (Haralambos and Holborn 2004 : 65) note that the idea of the working class has become a symbol of 'socially constituted definitions of failure', they suggest the term should be abandoned all together, as in their view no such 'underclass' exists. Perhaps the question of whether the underclass exists or not is not the question that holds most weight here, more the most important question is whether having a group in society that is labelled as being worthless and almost seen as beyond help, is a dangerous situation as noted throughout this essay, the people in this group are among some of the most vulnerable. ...read more.