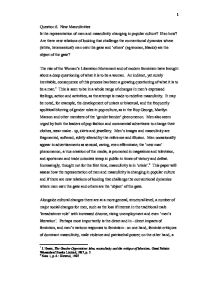 Is the representation of men and masculinity changing in popular culture

Question 6. New Masculinities Is the representation of men and masculinity changing in popular culture? If so how? Are there new relations of looking that challenge the conventional dynamics where (white, heterosexual) men own the gaze and 'others' (eg women, blacks) are the object of the gaze? The rise of the Women's Liberation Movement and of modern feminism have brought about a deep questioning of what it is to be a woman. An indirect, yet surely inevitable, consequence of this process has been a growing questioning of what it is to be a man.1 This is seen to be in a whole range of changes in men's expressed feelings, action and activities, as the attempt is made to redefine masculinity. It may be noted, for example, the development of unisex or bisexual, and the frequently apolitical blurring of gender roles in pop culture, as in the Boy George, Marilyn Manson and other members of the 'gender bender' phenomenon. Men also seem urged by both the leaders of pop fashion and commercial advertisers to change their clothes, wear make - up, skirts and jewellery. Men's images and masculinity are fragmented, softened, subtly altered by the reference and illusion. ...read more.

This gaze is also extended to other males, for example, men are often posed in sexually provocative and available positions in advertisements in male magazines, for instance, Ralph Magazine, where men are invited to be part of this gaze upon other men. Therefore it may be said that there are new relations of looking that challenge the conventional dynamics where men own the gaze and 'others' are the object of the gaze. Andrew Ettinghausen is familiar Australian-wide not only through his performance on the rugby field but also through his appearances in the media as a model for advertisements for a variety of products, like men's clothing. According to Buchbinder, he therefore runs the risk of becoming that anathematised thing, the male object of the gaze. Many of his appearances in television commercials evade the simple objectification of his body, and hence of his discursive position, by some of the strategies mentioned. However, a nude photograph of the famous Ettinghausen body invites his transformation into an eroticised object of the gaze. By allowing his body to be viewed as an object Ettinghausen was deemed, apparently, to have forfeited his claim to subjectivity, and hence control over his body. It became, as it were, public property. ...read more.

Therefore it may be argued that yes, changes are associated with the representations of men and masculinity in popular culture, but these changes are perhaps not 'real' changes. Creed suggests that, "...unless men are prepared to question the nature of male power - its alignment with aggression and its subordination of women and children - it is difficult to envisage any lasting or worthwhile changes taking place".16 It can be concluded that representations of men and masculinity in popular culture are changing due to the 'new man' phenomenon which may be described as a true creation of the media, although changes addressing the inner workings of the male are yet to be seen. Robert Bly believes that, "...men are still encouraged to look upwards and out rather than inwards and down, into themselves".17 It may also be seen that new relations exist in terms of looking that challenge the conventional dynamics where men own the gaze and 'others' are the object of the gaze. Cultural theorist L.H.M Ling warns of the problems which surface when the issue of masculine identity continues to be defined as 'hyper - masculinity'.18 "It is crucial that masculinity be re - thought particularly in relation to the new global media". ...read more.