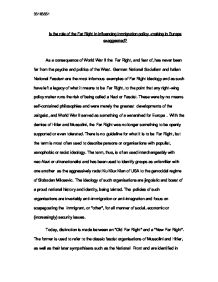 Is the role of the Far Right in influencing immigration policy-making in Europe exaggerated?

Is the role of the Far Right in influencing immigration policy-making in Europe exaggerated? As a consequence of World War II the Far Right, and fear of, has never been far from the psyche and politics of the West. German National Socialism and Italian National Fascism are the most infamous examples of Far Right ideology and as such have left a legacy of what it means to be Far Right, to the point that any right-wing policy maker runs the risk of being called a Nazi or Fascist. These were by no means self-contained philosophies and were merely the greatest developments of the zeitgeist, and World War II served as something of a watershed for Europe. With the demise of Hitler and Mussolini, the Far Right was no longer something to be openly supported or even tolerated. There is no guideline for what it is to be Far Right, but the term is most often used to describe persons or organisations with populist, xenophobic or racist ideology. The term, thus, is often used interchangeably with neo-Nazi or ultranationalist and has been used to identify groups as unfamiliar with one another as the aggressively racist Ku Klux Klan of USA to the genocidal regime of Slobodan Milosevic. The ideology of such organisations are jingoistic and boast of a proud national history and identity, being tainted. The policies of such organisations are invariably anti-immigration or anti-integration and focus on scapegoating the immigrant, or "other", for all manner of social, economic or (increasingly) ...read more.

What Lepenisation leads to, therefore, is a strengthening of the Far Right as a lobby group. They will not win an election, but they will have the centre-right to their bidding, on a domestic level. With regards immigration policy, however, there is little empirical evidence to suggest that Sarkozy's regulations rise or fall with the popularity of the FN. The British National Party are currently Britain's foremost anti-immigration organisation, a descendant of the National Front and the Union of fascists. Founded in 1982, the BNP claims that "white Britons have become second-class citizens" and asserts that " asylum-seekers and immigrants are pushed to the front of the queue for housing, jobs and benefits". Perhaps benefitting from the growing Islamaphobia following 9/11, the BNP complete with suits and repackaged rhetoric began to garner increased support and in 2001succesfully ran for council seats in the North-West of England, not an area particularly known for its high levels of immigration. A poll in 2002, found that immigration ranked highly amongst the concerns of 40% British immigrants. At the same time, the Conservative leadership was weak and the BNP capitalised by targeting disillusioned centre-right voters. When the Labour Party chose to occupy BNP territory, and David Blunkett spoke of the children of asylum-seekers "swamping" schools it gave the BNP further legitimacy (Copsey, 2008). Since then, the British National Party has been a constant fixture on the political scene and has sensationally been invited onto the BBC's Question Time and interviewed in the mainstream press. ...read more.

Following internal conflict in 2007, the Far Right bloc of the European Parliament was disbanded and the few Far Right MEPs are viewed as non-aligned members, and thus are even more marginalised then their domestic counterparts. These Far Right MEPs, somewhat ironically, are opposed to the European Union and seek to have their state leave the Union, most prominently for boarder reasons. They are, as expected, a rather muted force in the European Parliament and have influence only to the extent that the European Union has set up a Consultative Committee to monitor the expression of racism and xenophobia" (El-Agraa, 2001) Whilst it is clear that immigration is a permanent fixture on the agenda across Europe, one cannot say with any conviction that this is at the behest of the Far-Right. As previously stated, European citizens tend to be anti-immigration and this has increased sine 2001. Also, as stated, there is little evidence of the Far-Right becoming dominant in the democratic process. With regards immigration policy, which is the subject for all manner of lobbying, and subject to external factors, the Far Right are marginal in the influence. What this essay can say for certain, however, is that the 21st century domestic policies of European nations is directly influenced by Far Right sentiment, particularly with regards Islam. Thus the case is not that the influence of the Far Right on immigration policy is being exaggerated, but rather that the influence the Far Right have as a lobby group on domestic policy, in regards to 1st and 2nd class immigrants is being understated. ...read more.