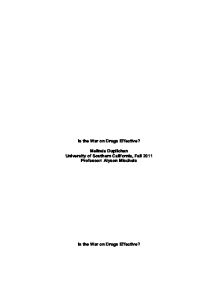 Is the US Policy of the War on Drugs Effective?

Is the War on Drugs Effective? Melinda Duplichan University of Southern California, Fall 2011 Professor: Alyson Mischels Is the War on Drugs Effective? A. Introduction In society drugs have been nothing but a social problem, a burden per say from Edgar Allen Poe smoking opium in an attempt to make his poetry more creative, to Vietnam soldiers coming back from the war addicted to heroin. Drugs were not a serious issue at back then, only a small hand full of people were actually doing the drugs, and they were just simply looked down upon. It was not until the late nineteen sixties when recreational drug use became fashionable among young, white, middle class American citizens, in the United States. (Farnsworth, 1999). The War on Drugs has made little to no positive changes in terms of trafficking and use. It is also very expensive and has negatively affected many people. Despite our nations' efforts, there are better ways to combat society's growing drug problem. If America makes the right decisions, this war can end peacefully. Our country is battling a serious drug epidemic. Lots of money is being spent to combat this problem and so far, there have been few positive results. Jonathon P. Caulkins, RAND researcher, describes just how concerned American citizens really are about the war on drugs. Illegal drugs are a $60-billion-per-year industry patronized by at least 16 million Americans, 7 percent of the U.S. ...read more.

Walker also explains the way that drugs fit, or does not fit, into the scheme of depending on a specific alliance and descent needs of particular societies and cultures (Walker, 2006). C. Policy Impact on Community The War on Drugs was supposed to improve the quality-of-life of Americans. Drugs are a great danger to the community's health, social, and economic costs. The war on drugs has become a major issue in our community. Our community does not have many programs to make the situation better, and some have failed and the situation has become worse. The war on drugs is a very big part of our society. As the people in my community suffer every day from drugs. There are many of them on drugs it feels like the whole community is falling because of it. Children as 12 years of age are selling or doing drugs. It has caused a ripple effect in the community some a generation of drug abusers in each family. The city is not helping when it comes to trying to provide help for them. for the ones who are more effected by watching a love one completely lose their life to drugs, says no one cares. Children are being killed, and losing their lives over nothing. Just recently an women lost her daughter and grand-daughter, because her boyfriend was doped up and beat her with an crowbar. ...read more.

We must only agree that the current federal policy for combating drug use, endorsed by most state and local governments, has not only failed, but has exacerbated the problem. All Americans at one point or another have used some psychoactive substance, whether caffeine or nicotine or marijuana. In many cases, the use of cocaine and heroin represents a form of self-medication against physical and emotional pain among people who do not have access to psychotherapy or Prozac(Walker, 2006). The market in illicit drugs is as great as it is in the inner cities because palliatives for pain and depression are harder to come by and because there are fewer economic opportunities that can compete with the profits of violating prohibition (Walker, 2006) Drugs are here to stay and its time has to abandon the concept of a drug-free society. We need to focus on learning to live with drugs in such a way that they do the least possible harm. So far as I can ascertain, the societies that have proved most successful in minimizing drug-related harm aren't those that have sought to banish drugs, but those that have figured out how to control and manage drug use through community discipline, including the establishment of powerful social norms (Walker, 2006). That is precisely the challenge now confronting American society regarding alcohol: How do we live with a very powerful and dangerous drug more powerful and dangerous than many illicit drugs that, we have learned, cannot be effectively prohibited? E. ...read more.