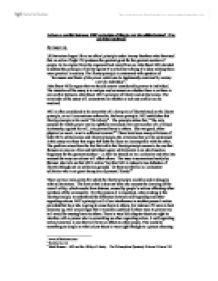 Is there a conflict between Mill's principle of liberty and his utilitarianism? If so can it be resolved?

Is there a conflict between Mill's principle of liberty and his utilitarianism? If so can it be resolved? By Jaspal Juj. Utilitarianism began life as an ethical principle under Jeremy Bentham who theorised that an action if right if it produces the greatest good for the greatest number of people. In its original form the argument had many flaws so John Stuart Mill decided to defend the principle of Utility against it's critics by refining it's ideas making them more practical in society. The liberty principle is concerned with question of 'the nature and limits of the power which can be legitimately exercised by society over the individual'.1 John Stuart Mills argues that we should reserve considerable powers to individual. The intention of the essay is to analyse and comment on whether there is or there is not conflict between John Stuart Mill's principle of liberty and utilitarianism. The remainder of the essay will concentrate on whether or not any conflict can be resolved. Mill is often considered to be somewhat of a champion of liberty based on the liberty principle, or as it is sometimes referred to, the harm principle. Mill establishes this liberty principle in his work "On Liberty". The principle states that, "The only purpose for which power can be rightfully exercised over any member of a civilised community, against his will, is to prevent harm to others. ...read more.

It is rather that Mill's mind remains in profound tension exhibited inter alia in the fact that although On Liberty and Utilitarianism were prepared for press pretty well contemporaneously by Mill he proceeds in each upon quite distinct and incommensurable premises - freedom in one book, utility In the other. There are two main problems with Hibbelfarb's analysis. Firstly Mill certainly never saw himself as being torn between contending principles. Thus, recording the stages of his intellectual career in his Autobiography, he stresses his concern for consistency: "I found the fabric of my old and taught opinions giving way in many fresh places, but was incessantly occupied with weaving it anew".9 Secondly critiques of Hibbelfarb's analysis argue that her interpretation is somewhat forced. For the natural reading of Mill here is that he is simply claiming that considerations of "self protection" are "absolute" in the sense of being the sole or exclusive consideration to be held to be relevant in respect of "the dealings of society with the individual in the way of compulsion or control".10 An explanation of what Mill's intends is that, he intends the term to refer to the application, rather than to the derivation, of the Principle. Another reason as too way the Hibbelfarb school of thought is flawed in relation to this is that Hibbelfarb's reading is abruptly to foreclose further discussion of Mill's philosophical consistency, the advantage of this alternative is to leave the question of whether Mill can or indeed wishes to ...read more.

self-regarding actions do not always lead to the greatest utility in Mill's sense and how therefore we would be justified in ignoring the liberty principle. Yet the liberty to choose such actions for oneself, Mill believes, is one, which can only be good for the 'permanent interests of man as a progressive being'. If men are free to do as they wish (provided they do not harm other individuals) the resulting honest expression could open up paths, which may lead to a new and better society. Even if the liberty principle allows people to do and say things which now we might feel are offensive or wrong, the fact that new ideas are being expressed could mean that we discover things we would never have known otherwise, it could even serve to strengthen the beliefs which we had previously held. In conclusion to the second part of the question where if there is conflict between the principle of utility and liberty is it possible to be resolved I believe that the answer will be different for many people as in the case of the conclusion to the first part of the essay depending on a person's interpretation which in turn will form different results. For example Gertude Himmelfarb would view the question and believe that the conflict could not be resolved whereas people Richard Wholheim would conclude that utilitarianism and liberalism are not competitive but aspects of each other, thus meaning there is no real conflict to be found. ...read more.