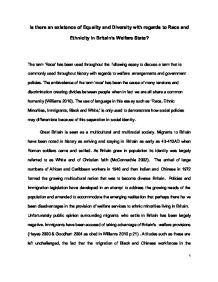 Is there an existence of Equality and Diversity with regards to Race and Ethnicity in Britains Welfare State?

Is there an existence of Equality and Diversity with regards to Race and Ethnicity in Britain's Welfare State? The term 'Race' has been used throughout the following essay to discuss a term that is commonly used throughout history with regards to welfare arrangements and government policies. The ambivalence of the term 'race' has been the cause of many tensions and discrimination creating divides between people when in fact we are all share a common humanity (Williams 2010). The use of language in this essay such as 'Race, Ethnic Minorities, Immigrants, Black and White,' is only used to demonstrate how social policies may differentiate because of this separation in social identity. Great Britain is seen as a multicultural and multiracial society. Migrants to Britain have been noted in history as arriving and staying in Britain as early as 43-410AD when Roman soldiers came and settled. As Britain grew in population its identity was largely referred to as White and of Christian faith (McConnachie 2002). The arrival of large numbers of African and Caribbean workers in 1948 and then Indian and Chinese in 1972 formed the growing multicultural nation that was to become diverse Britain. Policies and Immigration legislation have developed in an attempt to address the growing needs of the population and amended to accommodate the emerging realisation that perhaps there have been disadvantages in the provision of welfare services to ethnic minorities living in Britain. ...read more.

Blacks still felt discriminated against in the provision of welfare services, and placing then in 'ghetto' communities such as Brixton only cut them off more from society. In society there seemed to be confusion with regards to citizenship status and entitlement. Regardless of whether you where an Immigrant, Black or any other Ethnic minority, you were all labelled the same; 'Immigrant', 'Asylum seeker' or 'Refugee'. The difference was that Asylum seekers and Refugee's have no legal position within Britain, no status and rights to claim welfare services (Williams 2010 p9). This fuelled the belief that anyone who was not white did not belong in Britain. Present day government policies and documents now refer to Black and Ethnic minorities as BME (Black, Minority Ethnic). This new label hopes to relate to the need of a minority rather than the ethnicity itself (Wilson 2010 p 9). Over the decades Britain has offered British Citizenship to many Refugees or persons seeking work or education, especially those whose countries have become occupied territories such as the Commonwealth countries. The Commonwealth Immigrants Act (1968) withdrew Commonwealth migrant's automatic right to settle in Britain unless they had parental ties with Britain. The Immigration Act (1971) ...read more.

Feelings of inequality are still being heard across the country, last summer's rioting in UK cities left the country feeling a mixture of ashamed and angry that new generation Britain has little regard for its neighbours no matter if your Black or White. How can equality and diversity be achieved in such a society full of indifference? Academics have suggested that the welfare system be people led, democratically with flexible arrangements to meet the changing needs of our multicultural society, creating greater solidarity towards difference and diversity (Williams 2010). The present coalition government leader David Cameron recently reflected on the 'the slow-motion moral collapse... of our country these past few generations'. His speech also said that embracing certain 'Christian values' would confront this (No 10 2011). Perhaps in order to keep his speech more fitting to the promise of harmony between citizens regardless of their personal characteristics, his speech could have embraced a little more diversity on what it means to be British not just Christian values but Islamic, Hindu, Jewish etc. Acceptance of difference whether it's because of colour, faith, education or wealth seems to be the underlying problem not just in Britain but in the World. ...read more.