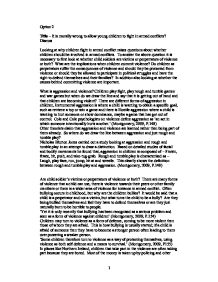 It is morally wrong to allow young children to fight in armed conflicts? Discuss

Title – It is morally wrong to allow young children to fight in armed conflicts? Discuss

Looking at why children fight in armed conflict raises questions about whether children should be involved in armed conflicts.  To answer the above question it is necessary to first look at whether child soldiers are victims or perpetrators of violence or both?  What are the implications when children commit violence? Do children as perpetrators suffer the consequences of violence and should they be protected from violence or should they be allowed to participate in political struggles and have the right to defend themselves and their families?  In addition also looking at whether the causes behind committing violence are important.

What is aggression and violence? Children play fight, play rough and tumble games and war games but when do we draw the line and say that it is getting out of hand and that children are becoming violent?  There are different forms of aggression in children, Instrumental aggression is where a child is wanting to obtain a specific goal, such as retrieve a toy or win a game and there is Hostile aggression where a child is wanting to hurt someone or show dominance, maybe a game that has got out of control.  Cole and Cole psychologists on violence define aggression as ‘an act in which someone intentionally hurts another.’ (Montgomery, 2009, P.148)

Other theorists claim that aggression and violence are learned rather then being part of them already.  So where do we draw the line between aggression and just rough and tumble play?

Are child soldier’s victims or perpetrators of violence or both?  There are many forms of violence that a child can use, there is violence towards their peers or other family members or there is a wider area of violence for instance in armed conflict.  Often bullying occurs in childhood, but why are the children bullies?  It would be said that a child is a perpetrator and not a victim, but what turns the child to be a bully?  Are they being bullied themselves and feel they have to defend themselves or are they just naturally born to be horrible to people.

‘Yet it is only recently that bullying has been recognised as a serious problem and seen as a form of violence against children’ (Montgomery, 2009, P.154)

Children may turn to violence as a form of defence, coming to be more violent then those of whom they are afraid.  This is how bullying is usually started; if a child is afraid of someone then they have to become a stronger person often leading to them over powering a weaker person.

‘Some children therefore turn to violence as a way of protecting themselves, using violence as both self defence and a means to survival.’ (Montgomery, 2009, P155)

In places like Northern Ireland, children that take part in the violence are often taking part because they are bored.  Most of the money is taken up by policing and other areas to keep the streets safe in Ireland leaving the children with nothing to do, thus leading them to commit crime and violence.  This in a way leads them to be victims as they are fighting for the right to be able to be children and have things to do but also to be perpetrators because if they stopped fighting then may be more money can be injected into activities for them.

‘Formally we felt sorry and angry about the fate of children in disaster zones.  Now we fell sorry and fearful’ (Ryle, 2009, P183)

What are the implications when children commit violence themselves?

But often there are children that want to join an armed conflict, mostly to support their family but sometimes because it gives them a sense of purpose and comradeship and they learn skills of loyalty, teamwork and independence.  It can make them feel powerful above adults and often are brutal and without pity especially when they have seen family members killed. In places such as Pol Pots army the Kamer Rouge children were given power over adults leading them to gain rights above adults to have an opinion giving them protection of life.

Children that have committed violence also find it very hard to become part of their community again, finding that people will not accept them into their family if they have seen so much violence and committed so much violence.  This often leaves these children to have to face a life without family

‘They must be seen not as passive victims who need to be rehabilitated but as active agents who can rebuild their communities and act as peacemakers in the reintegration process.’ (Montgomery, 2009, P171)

They often have to protect their families, leading them to be subjected to violence instead of weaker family members.  Many child soldiers have to go through an initiation process to see how strong they are, many are beaten and used to do the jobs that adults do not want to do and are often forced to commit crimes or they themselves would be hurt.

Most of all the main consequence of children as perpetrators is that they find it very hard to lead a normal life after armed conflict.  They have either seen to much violence and find it hard to live with other people or they are not accepted into a community for fear that they will turn on the community that are trying to help them.

Should children be protected from violence or should they be allowed to participate in political struggles and have the right to defend themselves and their families? The apartheid regime in South Africa has been very violent on children causing many deaths of children due to adult brutality, so in this case the children have no other choice but to fight to protect themselves.  If we take this right away from them then they are leaving themselves wide open to more harm.

Many countries also do not see a seventeen year old as a child, seventeen years old can be expected to take on an adult role like being head of a family yet they can not go to war to fight for what they believe in.

‘I doubt that they even accept that they are children, and in the case of seventeen year olds, I am not sure they are wrong.’ (Ryle, 2009, P184)

‘As the amnesty report acknowledges, the choice is likely to be soldiering or starvation.’ (Ryle, 2009, P184)

So why should we take to right away for a child to protect themselves and their family.  If we take this right away them children will die of starvation and be subjected to more pain and suffering as they are unable to defend themselves.

But every child has the right to be protected from harm and abuse; if we take away the right for them to fight will we be subjecting them to more torture?

There should be a right for them not to be forced into fighting; they shouldn’t feel under pressure to fight.  Things need to be looked at as to how to stop the need for children to fight not to stop them from protecting themselves.

At the same time children are being abused and exploited and used in armed conflicts, and every child does have the right for this not to happen to them.  So we must protect the children that do not want to be involved in fighting.  Looking back other the course, some children do not want to be helped and by helping them you can sometimes make their life harder for them and their families.  What has to be done is right for the child.

Are the causes behind committing violence important?  Every child that commits crime has to have some feelings about the cause they are fighting for.  Most will feel very strongly about what they think is right whether it be defending the cause or being against the cause.  The apartheid regime where children are beaten regularly by adults in authority is very important to the children in South Africa.

‘Given the statistics, it can be argued that South African children had no choice but to fight back.’ (Montgomery, 2009, P165)

They are trying to defend themselves and give themselves the right to a peaceful life.  They know that if they don’t fight for what they believe in then more children will be killed.

‘In Africa where there is no state to protect you, a gun may be the only way to ensure that you and your family have food and that someone else doesn’t take it away from you.’ (Ryle, 2009, P184)

In the Palestine rioting, children believe they are doing the right thing by attacking the police with stones.  They have been brought up to believe in the cause and want to make their families proud by being a part of it.

In Northern Ireland many of the crimes and violence that are committed there by children are often due to boredom.  They feel this is the only way for them to communicate to authorities, so yes there cause is very important to them.

Some causes we may feel are not important and we may feel that it is a waste of time fighting and not worth all the violence, but for the people involved they are important, for many people if they do not defend their cause then it could lead to more problems for them.

It is wrong for children to fight in armed conflicts; they may be forced into fighting.  They may feel that they have no choice but to fight for their rights.  They may have to fight to protect themselves and their families.  They may just want to be part of a group that they can learn independence from, there may not be many options for them with work choices so joining the army may be the way forward for them or their families may starve.  They may be alone in the world and turn to the army for a community life instead of living by themselves.  There are a number of reasons for children to be involved in armed conflict whether it is by choice or forced upon them.  We have to protect children from harm but by taking away the right to join armed conflicts are we harming them more?  If children are not allowed to fight for their rights will they then be subjected to more harm?  This subject is very sensitive to what is wrong and right.  We want to protect children but at the same time we want them to have rights.  The area that needs to be looked at more closely is why these children feel the need to become involved in armed conflict.  If we can eliminate this then the children would not have to fight for their rights.  The larger picture here is not to stop children from fighting but to stop the reasons why children have to fight.