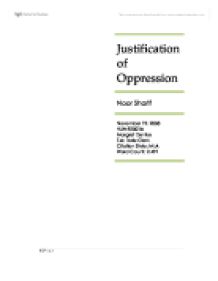 Justification of Oppression Noor Sharif November 19, 2008 HUMR2001A Margret Denike T.A: Dale Clark Citation Style: MLA Word Count: 2,491 What truly motivates imperialism is a question for the ages. Many would argue that greed is the culprit; others would argue that nationalism or something as simple as intolerance is what motivates one to amass enormous military forces in order to conquer lands. Whatever the case may be and whatever perspective one holds as to what in particular motivates certain individual to partake in imperialism, no one can deny the mind of an imperialist is an arrogant one. In the mind of an imperialist, his culture, cause or reasoning is superior to that of those he seeks to conquer. In the mind of an imperialist, no matter how inhumane his deeds, he is not a criminal nor is he a violator of human rights; he is a hero. Using the articles of Makau, Mosse, Grewal, Stoler, and Arendt and various other documents, this essay will explore and determine the reasons imperialists use to excuse their actions relating these to imperialistic actions of today. All past and present leaders of imperialist states have, in some way, attempted to justify their endeavors . Some have tried to insert some type of noble, honorable and beneficial reasoning for their ambition; others have simply attempted to change the colors of the picture into black and white for their populace, to make the people believe that :the other is evil in one way or another. ...read more.

Hannah Arendt makes us realize the mentality of the European conquerors when she says"...Race was the Boers' answer to the overwhelming monstrosity of Africa-a whole continent populated and over populated by savages-an explanation of the madness which grasped and illuminated them like 'A flash of lightning in a serene sky: 'Exterminate the brutes'" (Arendt 14). Again, the justification of the invader for neglecting the basic human rights of a people is simply because they are "inferior". When one speaks of the atrocities of the Nazis, one cannot neglect to speak of the Jewish population in Europe at that time, since they are believed to have suffered the most at the time of Hitler's' reign. A thorough analysis of Hitler's rise to power and the eventual annexation of most of Europe into his empire will clearly show the superiority mentality of imperialist leaders (Hilter 154). The atrocities that took place in Europe are a clear example of how the mentality of imperialists to cleanse the inferior people plays out. Hitler needed to give the downtrodden German people an enemy to focus on, therefore uniting them to rebuild the nation (Hitler 98) and to eventually put Hitler into power. George Mosse gave a clear perspective on Hitler's mentality towards the Jews: "The stereotype of the so-called inferior race filled with lust was a staple of racism, part of the inversion of accepted values characteristic of the 'outsider' who at one time threatened society and by his very existence confirmed its standards of behavior. ...read more.

Although this money is not free is it simply a loan with high interest rates attached to it (Elich 374). In this way, Western countries can maintain control of other less wealthy countries. Since these developing nations are unable to pay back the enormous amount they owe in debt, the wealthy countries who are in charge of such organizations like the IMF impose strict regulations and sanctions for the country to help pay back the debt (Elich 375). Using this method, Elich says that historically imperial countries use a different technique, less obvious then in history, to control, maintain and violate human rights in certain areas and to certain populations (Elich 376). In order to properly prevent imperialistic actions to continue which further the development of human rights abuses we must understand the roots of the actions itself and the very history of the people who commit these actions to help prevent them from furthering. To stop the current wave of imperialistic actions, it is necessary to put into perspective how this terrible cycle of power itself began and why it is being carried on. We must look at the political motivations of the world leaders now and historically pushing for this type of domination and carelessness for human life to continue and we must question their motivations. If the evidence, as clearly shown throughout this essay conveys that more innocent people are being harmed rather than helped why should the world sit by and let this continue? It is up to each of us to seek out the appropriate answers and to motivate others all around us to put a stop to these abuses. ...read more.