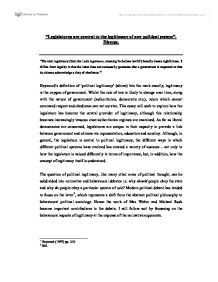 Legislatures are central to the legitimacy of any political system

"Legislatures are central to the legitimacy of any political system". Discuss. "The term legitimacy (from the Latin legitimare, meaning 'to declare lawful') broadly means rightfulness. It differs from legality in that the latter does not necessarily guarantee that a government is respected or that its citizens acknowledge a duty of obedience."1 Heywood's definition of 'political legitimacy' (above) hits the mark exactly; legitimacy is the oxygen of government. Whilst the rule of law is likely to change over time, along with the nature of government (authoritarian, democratic etc.), rulers which cannot command respect and obedience can not survive. This essay will seek to explore how the legislature has become the central provider of legitimacy, although this relationship becomes increasingly tenuous once authoritarian regimes are examined. As far as liberal democracies are concerned, legislatures are unique in their capacity to provide a link between government and citizens via representation, education and scrutiny. Although, in general, the legislature is central to political legitimacy, the different ways in which different political systems have evolved has created a variety of nuances - not only in how the legislature is valued differently in terms of importance, but, in addition, how the concept of legitimacy itself is understood. ...read more.

the community, the member for that place ought to be as far, as any other, from any endeavour to give it effect."6 Thus representation - investing power on the behalf of constituent citizens - provides legitimacy in the democratic system. Whether the legislators are seen as 'one of the people' or not, their role is legitimate because they are for the people i.e. periodically they must contest an election which should determine whether or not they have satisfied their electors. Legislatures adopt policies and make laws through the process of deliberation. While usually based on some broad set of principles contained in written and unwritten constitutions, decisions need not proceed from the rule of law or specific legal precedents. In this way legislatures differ from the courts; its capacity as a forum for debate acts as an authority on whether government policy should be given assent or not. The consequent necessity of the executive to persuade to the legislature that what it wants to do is right ultimately enhances the political legitimacy of the regime. Following from the previous argument that the legislature is made up of representatives whose function is to serve the people they represent, it is thus ensured that the political system serves the needs and wants of the people as a whole. ...read more.

However, the centrality of the legislature to legitimacy is not just based on political organisation - every country's political system develops and evolves according to its history, makeup, and political and social conditions. When a country tries to graft another country's political system onto its own, it rarely works. This was the case, for example, when Nigeria tried to adopt the U.S. presidential system some years ago. The system failed because it did not provide a role or outlet for dissenting parties. As a result, revolts in the form of military coups ensued. There has been no sustained stability in Nigeria since. Therefore, although Nigeria constructed a legislature - with the aim of creating an effective and legitimate system of governance. As a case study, Nigeria exemplifies how the legislature, whilst central to legitimacy, is only one component among many in the complex manchinery of legitimising a political system. As discussed there are overwhelmingly powerful arguments that argue for representation, deliberation and education as virtues of the legislature which make it an essential provider of legitimacy. However, it has been examined that this is not always the case in more authoritarian regimes, or even those with different historical and cultural traditions. Yet, it is safe to say that, as far as Western liberal democracies are concerned, the legislature is the most important, effective and legitmate aspect of the political system. ...read more.