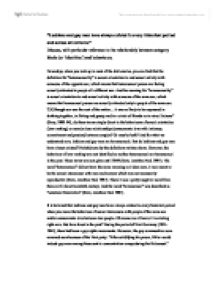 &quot;Lesbians and gay men have always existed in every historical period and across all cultures.&quot;Discuss, with particular reference to the relationship between category labels

The next day, Qiu Jin appeared before Wu Zheying in a man's suit and presented her with a pair of shoes and a skirt, explaining to her dear friend that "These items were part of my trousseau. Now that I have decided to wear men's clothes, I have no need for them. Please keep them in remembrance of me after we part." ... June Chan, a Chinese American lesbian activist in New York City, includes pictures of Qiu Jin in her famous slide show on Asian lesbians. However, historian Mary Rankin, who has written the most extensive biography for Qiu Jin in the English language, does not explore the nature of the Qiu-Wu friendship. ... No other historian of modern China has dared to address the possibility of a lesbian relationship between Qiu Jin and Wu Zheying. (Ng Vivien, in Duberman Martin, 1997: 201) This article is rather ambiguous and leaves a question mark for the relationship between Qiu Jin and Wu Zheying. As what Vivien found was secondary information, a lots of them could not be proved and had past already, we just never know. In the past, many homosexual couples kept their relationships secretly might be because of people always wanted to stay in the majority group and did not want to look odd with the others so they keep their sexuality under. ...read more.

We are all just choosing a partner among the human beings, why does the gender thing matters so much? Hopefully this would be changed in future, just like the idea or meaning for the term "homosexual" has been changing a lot over time. The earliest descriptions for the term are not really the same as the modern conception that we are having now. It was emphasized on effeminacy where now in contrast more like "fag, queer, gay, bent" (McIntosh Mary, 1968). In conclusion, the homosexual behavour should have always existed in every historical period and across all cultures. However, it is not easy to prove for the past as we usually have to rely on secondary evidences but not on primary information or direct observations. The reliability and validity of such information are often questionable as the sources are usually have been processed by others (the writers or the researchers) and the material would have been subjected to the writers' schema or expectations. There is also a problem of temporal validity, as meaning of word might change over time and the social expectation is also changing. We could not subjectively using the knowledge and expectations that we are having now to interpret the past information. But, nevertheless, the existence of homosexual behavour in the past and over different cultures can not be disproved as well. ...read more.