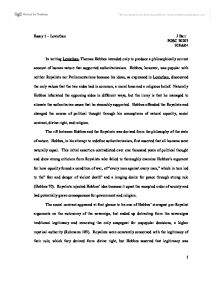 Essay 1 - Leviathan J Barr POSC 30203 10Feb04 In writing Leviathan, Thomas Hobbes intended only to produce a philosophically correct account of human nature that supported authoritarianism. Hobbes, however, was popular with neither Royalists nor Parliamentarians because his ideas, as expressed in Leviathan, discounted the only values that the two sides had in common, a moral base and a religious belief. Naturally Hobbes infuriated the opposing sides in different ways, but the irony is that he managed to alienate the authoritarian cause that he staunchly supported. Hobbes offended the Royalists and changed the course of political thought through his conceptions of natural equality, social contract, divine right, and religion. The rift between Hobbes and the Royalists was derived from the philosophy of the state of nature. Hobbes, in his attempt to redefine authoritarianism, first asserted that all humans were naturally equal. This initial assertion contradicted over one thousand years of political thought and drew strong criticism from Royalists who failed to thoroughly examine Hobbes's argument for how equality forced a condition of war, of "every man against every man," which in turn led to the" fear and danger of violent death" and a longing desire for peace through strong rule (Hobbes 70). ...read more.

Furthermore, according to the social contract theory of Hobbes, the purpose of government was to "maintain order and security for the benefit of the citizen." That contradicted the principles of Royalists who were interested in collective glory and imperial aggression over collective security and peace for the general populace. For centuries divine right had been the premise for legitimate royal rule in England. In Leviathan, Thomas Hobbes rejects the entire notion of divine right as a basis for authoritarian rule, thereby setting the stage for a conflict between traditional Royalists and his new contract based authoritarianism (Hobbes 96). Hobbes conception of royal rule without divine right stemmed from his overarching dismissal of natural law, which amounted to a denouncement of all supernatural or moral authority. Hobbes' rejection of natural law might have seemed advantageous to many Royalists, as it removed any conception that ones conscience should direct their actions, thus thwarting the surge of protestant ideology that was plaguing monarchs in mainland Europe at the time. Royalists, however, saw that negating natural law also meant removing the traditional means of the Crown's legitimacy, divine right (Ebenstein 359). ...read more.

Furthermore, the Church of England, as well as the similarly organized Catholic Church, was premised on a hierarchical inequality that ordered and separated parishioners from ecclesiastical officials. This contradicted Hobbes assertion of natural human equality and thus his conception of secular government based on social contract. Hobbes advised that leaders rule in a wholly secular manner to prevent conscience driven patrons from questioning the autonomy of the sovereign. By making multiple arguments for the separation of church and state Hobbes effectively alienated Royalists who favored the ability to manipulate the church for political gain (Strauss 77). Conversely, Leviathan also disturbed many church officials, who sided with the Royalists, because often the Church was able to manipulate the government for its gain. Both the church and the Royalists stood to loose in the Hobbesian conception of authoritarianism. While Hobbes had no intention of making enemies of both Royalists and Parliamentarians, it could be argued that by failing to effectively argue for one side or the other, he succeeded in creating more moderate, and certainly more equal, society in the long term. Meanwhile, Hobbes' conception of human equality paved the way for Locke's more liberal treatises on the role of government and the social contract. ...read more.