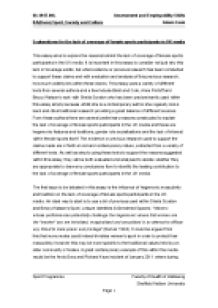 Literature Review; Explanations for the lack of coverage of female sports in the UK media

When analysing this study, whilst it is a slightly out dated and not used in a sporting context it provides one possible definition of both s*x and gender. But one of the biggest problems that occur within a society that strives for equal gender rights is that both genders are socialised in different ways. A classic example is the use of colours in gender socialisation; in a contemporary UK society it is not uncommon to find young boys dressed in darker, ?masculine? colours such as blue compared to young girls with their ?feminised? pink. One study that supports this claim is Batman vs. Bratz (2011) where it was indeed found that whilst boys chose traditional ?masculine? colours, their female counterparts preferred their own traditional ?feminine? colours. Whilst it is possible to criticise this study for not being based around sport itself, it is contemporary, provides a simple explanation allowing progression onto the next point. Another important analysis to make on this study is that this is quantitative information; quick, easy information to obtain and provides results with figures. ?Physical Education in schools still offer different activities that are gender defined, and teaching can provide dominant gender ideologies? (Scraton & Flintoff 2002). Looking back at this study used earlier in this essay, this can be used well again when looking at the contribution of gender role socialisations to the lack of coverage of female sports participants in the UK media. ...read more.