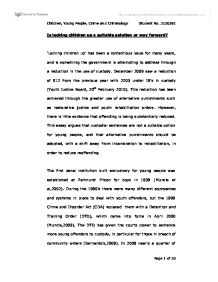 Is locking children up a suitable solution or way forward? 'Locking children up' has been a contentious issue for many years, and is something the government is attempting to address through a reduction in the use of custody. December 2009 saw a reduction of 512 from the previous year with 2203 under 18's in custody (Youth Justice Board, 20th February 2010). This reduction has been achieved through the greater use of alternative punishments such as restorative justice and youth rehabilitation orders. However, there is little evidence that offending is being substantially reduced. This essay argues that custodial sentences are not a suitable option for young people, and that alternative punishments should be adopted, with a shift away from incarceration to rehabilitation, in order to reduce reoffending. The first penal institution built exclusively for young people was established at Parkhurst Prison for boys in 1838 (Muncie et al,2002). During the 1980's there were many different approaches and systems in place to deal with youth offenders, but the 1998 Crime and Disorder Act (CDA) replaced them with a Detention and Training Order (DTO), which came into force in April 2000 (Muncie,2009). The DTO has given the courts power to sentence more young offenders to custody, in particular for those in breach of community orders (Barnardo's,2008). In 2008 nearly a quarter of custodial sentences were given for breach of statutory orders (NACRO,2009), which does not necessarily mean they have reoffended, rather some may have merely missed appointments with their YOT worker, or breached an Anti Social Behaviour Order (ASBO). It could therefore be argued that nearly a quarter of those given custodial sentences do not need to be in custody as they are not a serious threat or risk to society. Instead the focus should be placed on dealing with the issues they face, and trying to improve their circumstances, enabling them to adhere to the orders they are placed under, and steer clear from a life of crime. ...read more.

The YJB spends nearly two thirds of its budget on the 3 per cent of children in the criminal justice system, in custody, yet custody has shown to be ineffective with historically high reoffending rates. Nearly 80 per cent of 10 to 14- year-olds will reoffend within 12 months of release (Barnardo's,2008), therefore huge savings could be made if the use of custody was reserved for children convicted of violent or repeat offences. NACRO chief executive Paul McDowell backed the findings of the report on justice reinvestment, "Custody is expensive and overused. Prison resources should be reserved for serious offenders who present a danger to the public" (NACRO,2010). This highlights the concerns that the continued use of imprisonment at the current rate will cause a serious prison crisis. McDowell added, "Our experience shows that investment in prevention and community based projects is a far more effective and financially viable way to reduce crime and protect communities" (NACRO,2010). A recurrent theme throughout the history of child imprisonment has been the high reoffending rates. Section 37 of the CDA 1998 set out the principal aim of the youth justice system in England and Wales, to prevent offending and reoffending. Yet the consistent failure to reduce offending is inconsistent with such aims and undermines the very principles of imprisonment, as construed by penologist Jerome Miller, "The hard truth is that juvenile penal institutions have minimal impact on crime" (Goldson and Muncie,2006). The YJB Annual statistics for 2008 indicate some progress with a '2.2% reduction in reoffending since 2002' (Soloman and Garside,2008). If as claimed, 'around half of youth crime is committed by a small minority of prolific offenders', driving up the rate of reconviction would be a desirable outcome (Garside,2004). However, most crime is not the preserve of a small criminal hardcore, and therefore young people are far more likely to be unnecessarily criminalised (Garside,2004). The PRT has developed a five-year strategy to work with powerful partners, including non-governmental organisations to change government policy. ...read more.

In England and Wales we lock up 23 children per 100,000 of the population, compared with six in France, two in Spain and 0.2 in Finland. This clear comparison shows the extent of the over punitive approach taken in England and Wales, and the failure to effectively deal with youth offending. In conclusion, although imprisonment is a requirement for reasons of public protection (HO,2006), custody is costly and ineffective with minimal rehabilitative effect, due to increasing pressure on resources and inadequate support on release (Barnardo's,2008). Despite the YJB's attempts to improve post custody provisions, many young offenders continue to be left unsupported. Many are unable to continue with education and training or with substance misuse or mental health programmes on completion of their sentence, and often without suitable accommodation (Soloman and Garside,2008). It is therefore unsurprising that three quarters go on to reoffend (Barnardo's,2008), and it is this issue that needs addressing. We cannot continue 'dumping' young people back into the world that led them to offending in the first place. Through greater post custody support a young person can be prevented from turning back to the life of crime thus reducing reoffending rates. Those that breach statutory orders are often sent to prison as the government does not know how to deal with them or how to reduce reoffending. It has been shown time and time again that prison is not a suitable solution, or the way forward. However, the problem with alternatives are the lack of public confidence in their success, the opinion that they are not serious punishments (Morris,2007), and that non compliance often results in custody. The focus needs to be on crime prevention rather than imprisonment, and more needs to be done to rehabilitate and support young people leading to a reduction in their presence within the justice system. It is therefore without doubt that ordinarily, locking children up is not suitable and is not the way forward. ...read more.