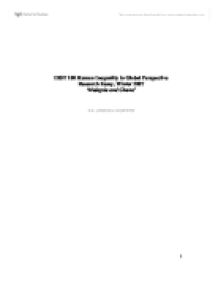 Malasya and Ghana Comparison on Development

IDST 100 Human Inequality in Global Perspective Research Essay, Winter 2007 'Malaysia and Ghana' TA: JESSICA DOBYNS Development is considered to be people-centered, participatory and environmentally sound. It involves not just the economic growth of a country, but equitable distribution, enhancement of people's capabilities, potential and widening of their choices. With development priority is given to poverty elimination, incorporation of women into the development process, self-sufficiency and independence of the people and governments, and protection of the rights of people. One may ask why is it important or necessary to compare and contrast the development of any two countries, since it is almost impossible to evaluate all aspects of there development in a simple essay. Ghana and Malaysia had much in common four decades ago; presently these two countries have very little in common. In this paper I chose to discuss and compare the development experiences of Malaysia and Ghana, in an attempt to examine such a divergence in development. Today Ghana is among the poorest nations of the world while Malaysia is a rapid developing country, joining the rank of the middle-income group of nations. So, why has Ghana's development experience been so different from that of Malaysia since their independence? Such a difference in the development of these two countries is worth analyzing. ...read more.

The country stands by a parliamentary democracy with a constitutional monarchy where the King is the highest ruler and a Prime Minister as the head of government. Therefore it is every five years that the public elects the members of parliament and the party with the highest number selects a Prime Minister who forms the government of the nation. Over the past 25 years or so the current government has managed to stay in power by forming complex alliances with opposition parties.6 Ghana on the other hand has made countless efforts over the past thirteen years to apply democracy to its nation. Constitutions are being put in place for democracy to flourish which is therefore a step in the right direction. There is a parliament and a president, which are both elected by the people every four years, with the President choosing a cabinet and a counsel of state, which are all approved by parliament; a system that is very similar to the American system. So we can argue; is this system the best for a country that is aspiring to be a middle-income nation? Such an accomplishment means that within the next four years, there must be an obvious indicator that poverty is eradicating, signs of increased private sector development should be highly visible and the construction of social and government institutions should be present to administer over the economy and assist in the human development of the nation. ...read more.

Though progress was made by Ghana in the health area, much work is still needed in terms of improving the health of its overall population. In 1996; only about 42 percent of its population had access to sanitation whereas Malaysia's percentage was 94 percent (World Bank, WDR, 2000/2001, 286). Another major difference that existed between both countries was that in the 1990s the total expenditure, yearly on health by both countries was almost equivalent, yet the rewards were quite unlike. It is without argument a strong human capital attracts and encourages growth, and an educated population generates an enduring effect economically with a larger tax base and socially through increased political involvement. Therefore investment in human development and the human capital of any country should be included in any economic development policy. The prevalence of a countries human capital will ultimately determine the rate of growth of its economy and integration into the world markets. So in conclusion, the status of development of both Ghana and Malaysia is certainly not alike at present, for Malaysia had definitely defeated Ghana is achieving developmental status or trying to do so. Though all of the factors which may have lead to this divergence were not discussed, with the comparison of the economic development, political stability and human development for both countries, Malaysia has definitely discovered the key to their continued success and movement towards developing country status. ...read more.