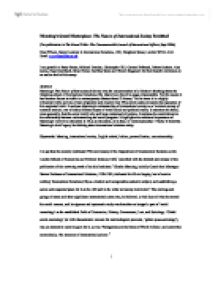 Manning's Quasi-Masterpiece: The Nature of International Society Revisited (For publication in The Round Table: The Commonwealth Journal of International Affairs, Sept 2004). Peter Wilson, Senior Lecturer in International Relations, LSE, Houghton Street, London WC2A 2AE. Email: p.c.wilson@lse.ac.uk I am grateful to Barry Buzan, Michael Donelan, Christopher Hill, Carsten Holbraad, Robert Jackson, Alan James, Hayo Krombach, Brian Porter, Geoffrey Stern and Hidemi Suganami for their helpful comments on an earlier draft of this essay. Abstract Manning's The Nature of International Society was the consummation of a lifetime's thinking about the fledgling subject of International Relations (IR). Many have found its pages impenetrable. For this reason it has become almost invisible in contemporary debates about IR theory. Yet for some it is a highly influential work, and one of rare originality and creative flair. This article seeks to restore the reputation of this neglected work. It analyses Manning's understanding of international society as a 'notional society of notional entities', one of many different layers of world social and political reality. It examines his belief, more generally, that the social world is by and large comprised of notions. It explores his commitment to the relationship between understanding and social progress. It highlights the continued importance of Manning's view of an education in IR as an education, at its best, in 'connoisseurship'. Finally it identifies Manning's chief legacy for thinking about international relations today. Keywords: Manning, international society, English school, holism, personification, connoisseurship. It is apt that the recently celebrated 75th anniversary of the Department of International Relations at the London School of Economics and Political Science (LSE)1 coincided with the fortieth anniversary of the publication of the crowning work of its chief architect.2 Charles Manning, initially Cassel then Montague Burton Professor of International Relations, 1930-1962, dedicated his life to forging 'out of next to nothing' International Relations (IR) as a distinct and recognisable academic subject, and establishing a secure and respected place for it at the LSE and in the wider university curriculum.3 The comings and ...read more.

In no way, he several times stressed, was the General Assembly representative of the 'will of mankind' or 'world public opinion', concepts themselves not spared the full Manningite treatment. With regard to this he warns us that the 'brotherhood of man' should be seen for what it is, an aspiration not a sociological fact (and an aspiration based on the dubious assumption that brothers squabble less than non-brothers).32 More generally, revolutionists, in the Wightian sense33, will find his verdict that the structure of international society is 'virtually unalterable', and that war is a 'built-in feature of that structure', pessimistic not to say defeatist.34 But it should not be concluded from this that Manning's conservatism was of the rigid, dyed in the wool kind. I have commented elsewhere on the important fact that Manning regarded the current system as the 'second best of six possible worlds'.35 The current formula for 'universal co-existence on this planet' he described as 'relative freedom, at best, in a world enjoying a modicum of order through an inherited and ever-developing system of inter-governmental arrangements'. The best formula that one could realistically conceive was 'the same [relative freedom], in a world enjoying a greater degree of order through more effectively-functioning inter-governmental arrangements'. Manning called on his readers to accept this as 'what we have to hope, and work, for, here and now.'36 The World of States and the Wider Social Cosmos It is clear, therefore, that Manning had what has become fashionable to call a 'normative agenda'. The fact that he concentrated nearly all of his efforts on 'possibility number-five' should not blinker us into thinking that he was not committed to the achievement of 'possibility number-six'. It was simply that 'intimate stock' had to be taken of the 'here and now' before any attempt was made to reach the better world that might be attained tomorrow. Otherwise 'our attempted flight' would very likely 'end up in a swamp'.37 It is also clear that Manning was no where near as state-centric in his approach to world politics as many would have him. ...read more.